Lightning Strikes Twice for Taika in Thor: Love and Thunder 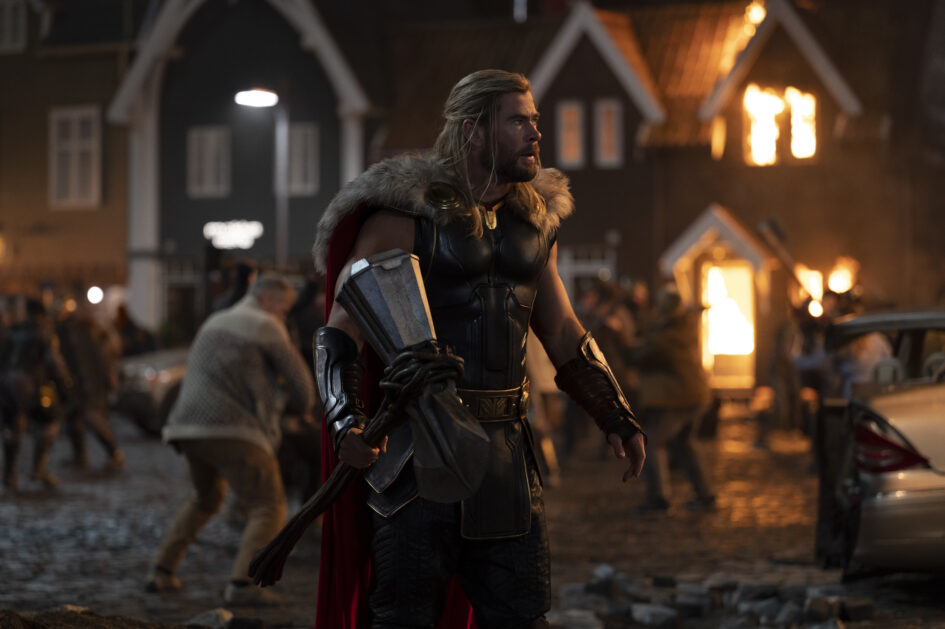 Per Matt
Originally dark and dreary, the Thor franchise was not exactly well received in Marvel’s Phase One by critics and fans alike (although I’m probably one of the few who didn’t mind the plot devices).

When Taika Waititi was hired turn it all around for Ragnarok, the filmmaker was a breath of fresh air for the superhero. After receiving high praise by Chris Hemsworth for renewing his interest in the character and winning an Oscar for Jojo Rabbit, Waititi’s return to the Marvel Cinematic Universe was solidified.

Thor: Love and Thunder picks up the pieces of our hero’s life, although it’s been anything but super. After defeating Thanos and his sister, he’s been sort of a trainwreck. No longer overweight and depressed, Thor keeps friends and family at arm’s length, never fully allowing them into his heart. Intergalactic battles seem to be the only things to rouse him out of this slumber, on which he’s never fully focused.

But when he learns a fallen friend (Jaimie Alexander finally returns as Sif!) needs some assistance, it’s finally time for him to reawaken.

Gorr the God Butcher (Christian Bale balancing his Pennywise and Voldemort tendencies), with some assistance by the Necrosword, is on a mission of vengeance to rid the universe of all deities. With New Asgard experiencing his rage, our “Space Viking” is initially overwhelmed in battle until a new character offers some assistance: The Mighty Thor!

Natalie Portman’s presence as Jane Foster’s alter ego pleases Thor, creating a love triangle with Mjolnir and Stormbreaker. As his arrogance and over-the-top antics slowly drain away, his heart grows three sizes that day. Together, they can do anything… but can they defeat Gorr?

Without giving anything away, I enjoyed the introduction of Zeus (Russell Crowe), but the highlights of the film definitely involved Toothgrinder and Toothgnasher (Thor’s magical, screaming goats), Stormbreaker’s newfound personality, as well as the alluring Zeusettes!

Oversimplifying Love and Thunder‘s theme, it all boils down to someone who has previously lost his faith and happiness — but all you need is love! The film has a never-ending pulsating ’80s throwback vibe, complete with neon colors, lots of comedic elements to pair with all the action and a rocking soundtrack.

My only criticisms involve Christian Bale’s lisp (which was frequently hard to decipher at my IMAX theater screening) and Natalie Portman, per se.

After her wooden performances in the Star Wars prequels, as well as the original Thor release, I lost interest in the actor. She earned high praise for her acting abilities in Black Swan (and rightfully so), but maybe she’s just not cut out for fandom genres. While she may smile a few times and looks pretty good wearing the costume, I never truly believed she was enjoying her role while watching her perform. And that’s a shame. Portman does encourage girl power, though.

As influential as Jon Favreau was to bringing Iron Man (and the MCU) to life and the Russo Brothers were to introducing Hydra and Thanos to the Marvel Cinematic Universe, Waititi deserves just as much credit in renewing the popularity of this Asgardian, who was lost in the wilderness after The Dark World.

Through two tales, he has brought many lighthearted moments to counterbalance all of the heavy stuff. As a result, I have equally enjoyed all of them. In fact, he’s the reason Thor’s become my favorite big-screen Marvel character (easily supplanting Captain America).

Taika’s brought a fun sensibility (as well as so many gay vibes) into the MCU, which was not previously present. And with that, Hemsworth’s developed into a more interesting and complex on-screen presence.

I am eagerly anticipating what’s next for the Norse god in Phase Four and hope that the third time’s the charm for this tag team, as I expect Waititi and Hemsworth to work together once more in another future fun-filled adventure.