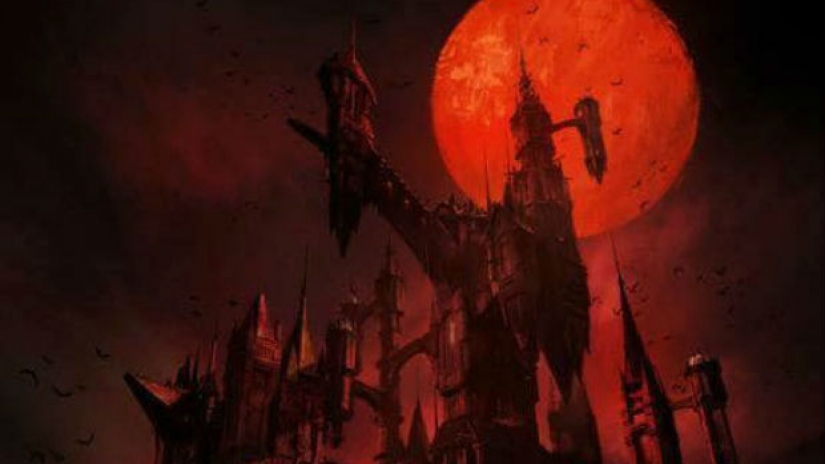 When the fourth episode of Castelvania ended, all I wanted was for the TV show to continue. There has finally been a good video game adaptation made in the West, even if it was terribly short. With four episodes clocking in at about 23 minutes each, the entire season runs just over 90 minutes. It is just enough to really grab your interest, but not leave you disappointed.

The show uses an anime-inspired art style, which the game series has been utilizing since the mid ’90s. Choosing to go with animation over live-action enables the show to fully realize the Gothic horrors that are necessary to tell the Castelvania story. The colors and set designs are wonderful, as are most of the character designs. There’s an odd choice with Trevor Belmont’s beard, only being a single zig-zag line that looks like it would be more at home on The Simpsons rather than the detailed design work here. 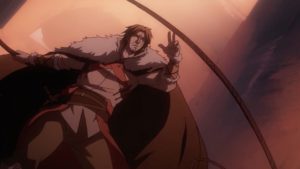 The animation is also occasionally stilted and stiff, likely a result of the production times and budget. It’s never enough to detract from the overall experience, however. The action sequences flow particularly well, and while some of the minor creature designs seem repetitive, the major monsters show have a suitable flair about them.

One of the most interesting aspects of the show comes in the first episode, with almost the entire running time dedicated to creating empathy for Dracula (voiced by Graham McTavish of The Hobbit). When the scholar, Lisa, comes knocking on the door of his castle in the late 1400s, Dracula finds a strong-willed woman of science, and the two quickly fall in love and marry. Then, when Lisa is burned at the stake as a witch for her studies, Dracula swears his vengeance on the people of Wallachia. It’s a terrific mood-setting first part that gives Dracula just as much, if not more, depth than 30 years of video games.

It isn’t until the tail end of the first episode that our ostensible protagonist, Trevor Belmont (Richard Armitage, also of The Hobbit), is introduced. And the introduction is less than friendly, with bar patrons bad-mouthing the Belmont family for being dark magic practitioners, when in reality they were monster hunters. Trevor spends the next two episodes drinking and trying to avoid trouble, rather unsuccessfully, I might add.

The city of Gresit is essentially the last bastion of humanity in Wallachia, and Trevor finds himself set against the Bishop of the church (Max Headroom himself, Matt Frewer), a true believer, who ordered the execution of Dracula’s wife. The Bishop believes that a group of monks called The Speakers are responsible for the darkness in the city, while The Speakers believe that a legendary soldier is sleeping beneath the city, who is the key to being saved. When Trevor intervenes in the church’s plans for The Speakers, he finds himself at odds with a powerful force within the city. Frewer gives The Bishop a tremendous monologue in episode three, conjuring fire and brimstone with each word spoken.

Eventually, Trevor and Sypha Belnades (Alejandra Reynoso) venture into the catacombs under the city and find the sleeping soldier, who turns out to be Alucard (James Callis of Battlestar Galactica). He is the son of Dracula, who has been resting and healing under the city since he tried to stop his father from enacting vengeance on Wallachia. After a pretty spectacular fight with Trevor, the two adventurers and Alucard set forth to stop Dracula’s reign of terror.

It’s an interesting point to end the season, seemingly just when the story really found its footing. The series had been moving at a pretty breakneck pace, introducing characters, and inserting occasional action sequences, so the finale feels a tad abrupt. What this ending does do, however, is whet the your appetite for more. And, for fans of the game series, it should be noted that these three (Trevor, Sypha and Alucard) are the three playable characters in Castlevania III: Dracula’s Curse. And now the game begins…