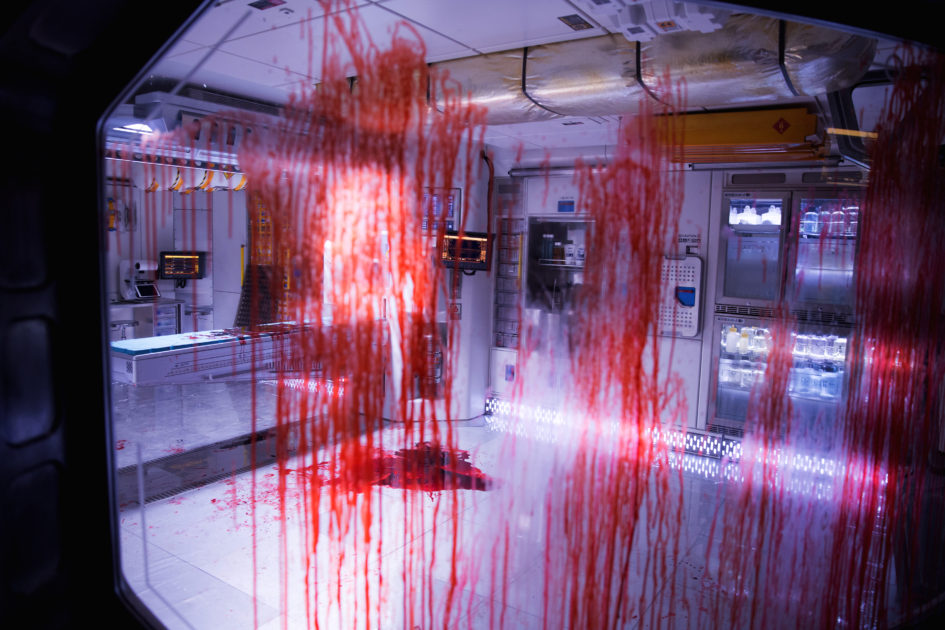 In space, no one can hear you scream. Unfortunately for everyone sitting around me at the local Malco, I was plenty loud and vocal. I try to write only positive, upbeat reviews and articles with my trademark snark and sarcastic wit. I’ve been trying to come at this from every conceivable angle and give you a review with minimal spoilers and plot points and more of the kick-ass horror action that was supposed to bring the franchise back to its roots. But, much like Prometheus — the prequel that wasn’t a prequel, but was a prequel… ugh —  it falls short of its promise and breaks the vow, that sacred covenant, that was sold to fans of both the franchise and the genre. There were plenty of entertaining moments, even some real freaky scenes and some stand-out performances and it’s well written, though maybe a bit too philosophical, given the scope of the film. So, allow me to vent for a moment about where they went wrong and then, I swear, I will tell you what they did right.

We’ve all been salivating over this movie since it was announced. Fans of the Alien franchise coupled with horror buffs and sci-fi nerds practically swooned in unison when it was said that this movie would bring fear back to outer space and hinted that we would have some closure as to the end of Prometheus. That much was true. There were quite a few nods to the original tail of extraterrestrial terror in the far-flung reaches of the void and, yes, we did further the narrative of the last outing into Ridley Scott’s nearly four decade-old tale of unknown horror lurking in the final frontier, but not in a way that’s going to make a lot of us happy. I’m going to spare you a synopsis that you’ve probably already seen on a dozen other sites already.

Thanks to the global marketing machine behind Fox’s latest big-budget act of cinematic necrophilia, we all know that a group of otherwise unwitting teens… I mean, space explorers, stumble across a big bad monster where they least suspect it. But unless you are that super-obsessive fan who has consumed every bit of pre-release marketing, from online reading to the special footage shot just to promote the movie, then you aren’t going to feel anything more for the cast of characters than you do in any other horror movie that just randomly dumps a group of strangers in front of you and starts slaughtering them. At least, in the original, they took an hour out of the run time to make us get to know, even care about a few of the soon-to-be departed. It’s a critical part of storytelling that seems to be eluding most big-budget productions these days. 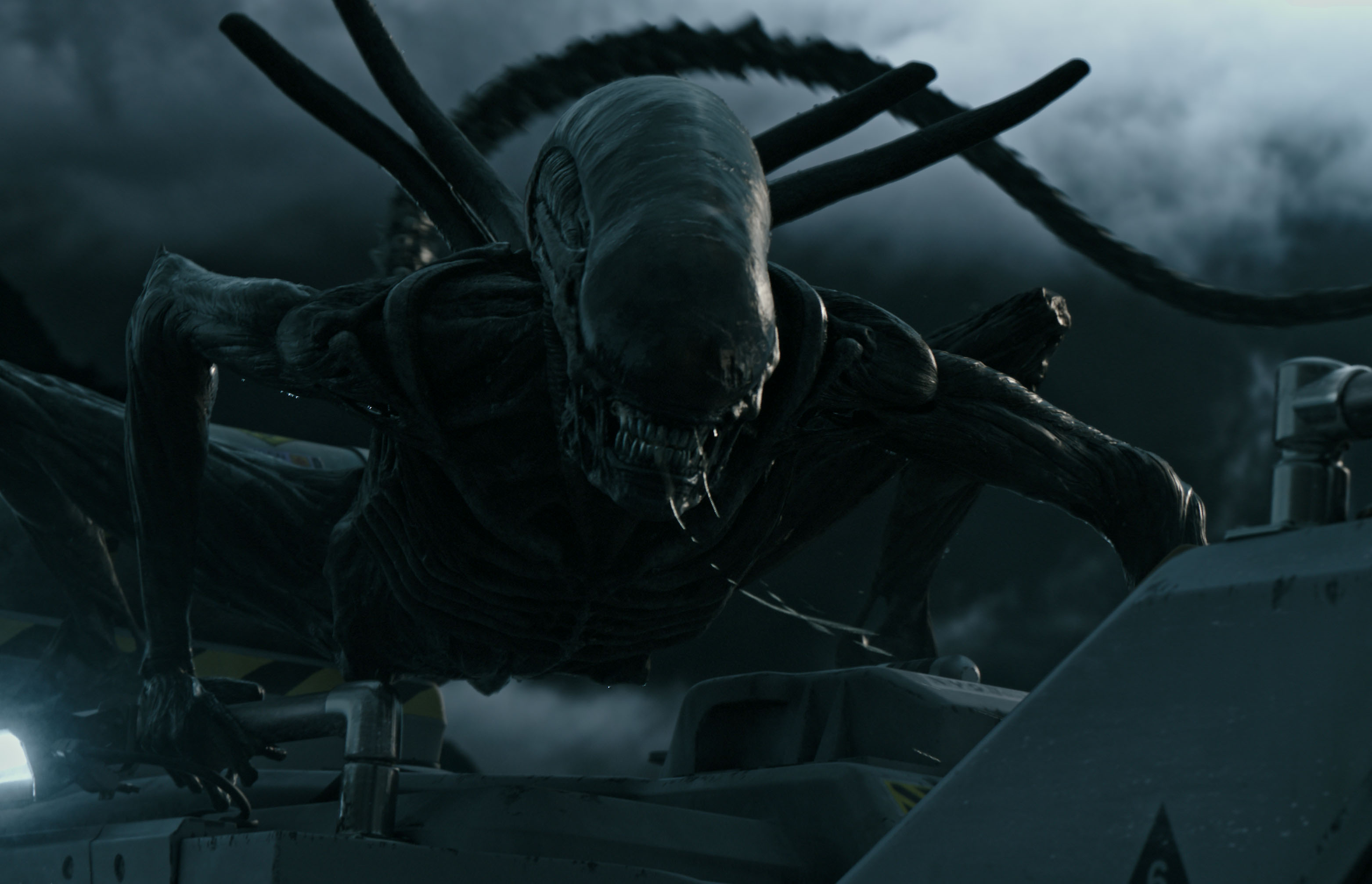 This Xenomorph is clearly not impressed.

The effects were exactly what I expected. Heavily computer-rendered designs that look like they came straight out of a video game developer’s Netbook circa 2010 with actors Photoshopped into them, in some cases so lazily as to make me think of the mid ’90s Arnold Schwarzenegger flop, Last Action Hero. There were a handful of practical effects splashed in for good measure, probably because you can only see so many lazily Sharpied descriptions of carnage written on green tennis balls before even the most seasoned pro looks at the directors and says, “What the hell?!” The story, itself, was contrived and formulaic to the point of almost being an insult. The motivations and drives behind every character — human, synth or Xenomorph — were so telegraphed and blatant that I could have walked out halfway through the second act and told you how it was going to end. Hell, I probably could have written a better ending and, unless Ridley Scott and the folks at Fox have got something up their sleeves that they’re not showing (like my $9.50 admission +tax), then it seems safe to say that the next megalithic-themed installment of this series will be just as perplexing and inexplicable as the last two have been.

That said, Danny McBride, as Tennessee, was great. It’s the first time I’ve ever seen him in a semi-serious role with a minimum of f-bombs worked into his lines and, I have to say, I was impressed. While the character, itself, was nothing new to sci-fi or horror, McBride’s acting went beyond the script and truly helped bring his character to life. The same can be said for Walter/David, the most hated synthetic human since Ridley killed Bishop. Played by Michael Fassbender, the character(s) played off each other and the human crew spectacularly with a weird sort of incestuous, necrophiliac vibe that was at times truly unsettling, if not unfortunately reminiscent of Norman Bates and a dozen other psychopaths with mommy/daddy issues.

The true highlight of this movie, the reason I’d maybe watch it again, is to see not one, not two, but three human incubators explode, giving birth to various types of Neomorphs/Xenomorphs. Again, I’m a man who will always choose a cheesy practical effect over the coolest CGI and while it would have been nice to have seen more makeup and practical work done in this movie, the CGI in these three meat explosions was not only thrilling, but fun. There was homage paid to the original film and scenes reminiscent of other installments of the franchise. One scene that should have been more meaningful and oddly beautiful, however, was their attempted tribute to the late H.R. Giger, whose art and direct influence and work with the original film led to the creation of the creatures and worlds that we know today. The artist was heartbroken and enraged when he was cut from the following films, but his work was bastardized and over marketed and, unfortunately, Covenant has not helped this any with its hybrid Slenderman/Alien Neomorphs. 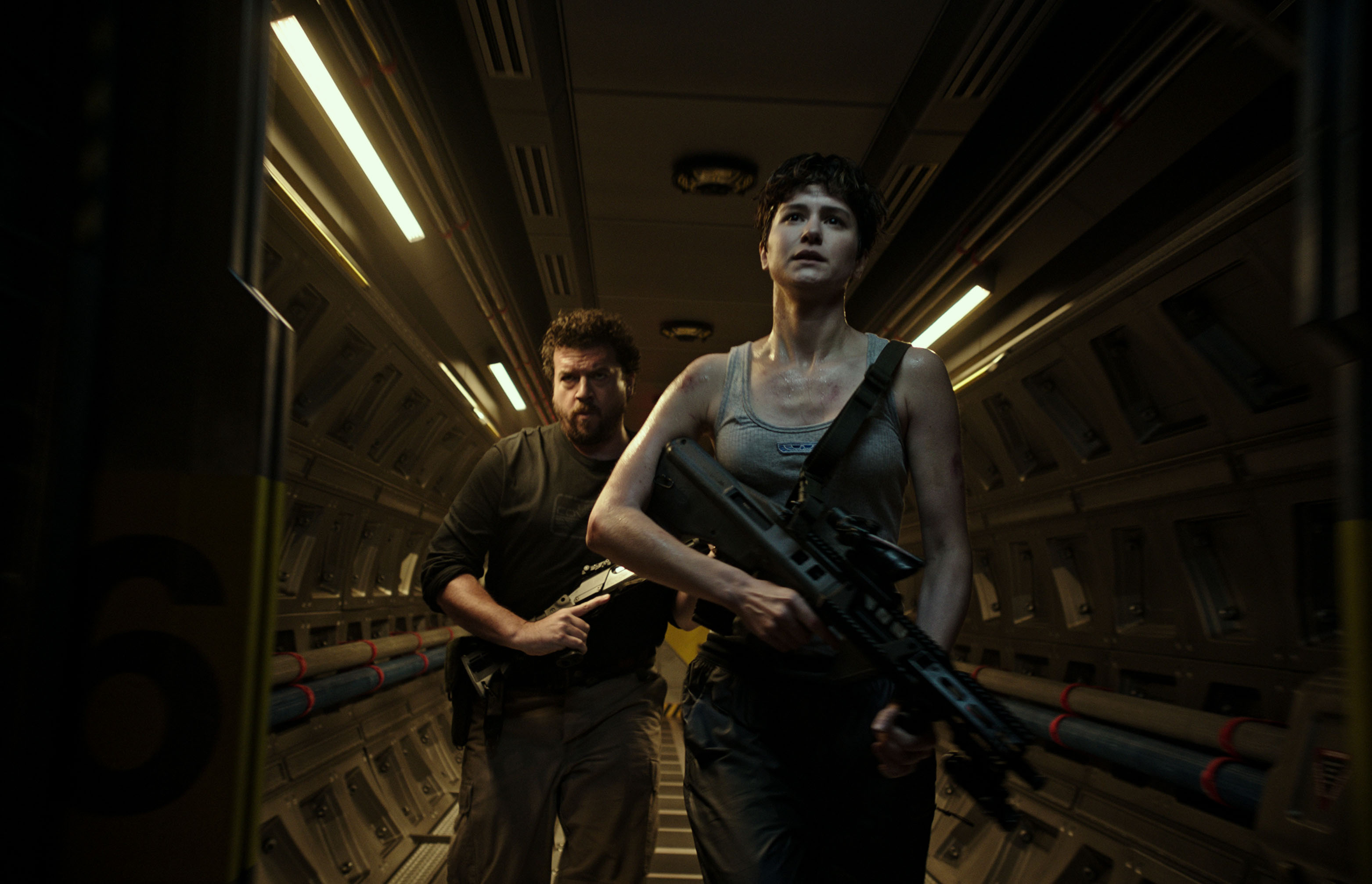 In all, I am not thrilled by this movie. As a follow-up to Prometheus and a bridge between its immediate predecessor and the 1979 classic, it just doesn’t work at all. Yeah, there are some super cool visuals, but there was too much story left untold, too many questions that remain unanswered and the whole thing felt more like a setup for another movie, than it did a self-contained story with potential for a sequel. Who knows? Maybe I’m overthinking this. Maybe my expectations from the writers and director should be lowered? There were lots of cool moments in Alien: Covenant, from awesome visuals to seeing a full grown Xenomorph sprint through a field of charred bodies toward its prey that made this a worthy addition to a franchise that knew immediate success (Alien, Aliens), to some really unsettling defeats like Alien: Resurrection and Aliens vs. Predator: Requiem. From the five star rating I would hope the original science-fiction horror classic ranks, I’d give Covenant a solid three, in the hopes that whatever sequel is still yet to be announced, they will once and for all settle the glaring plot holes and inconsistencies that this movie has only lightly attacked.