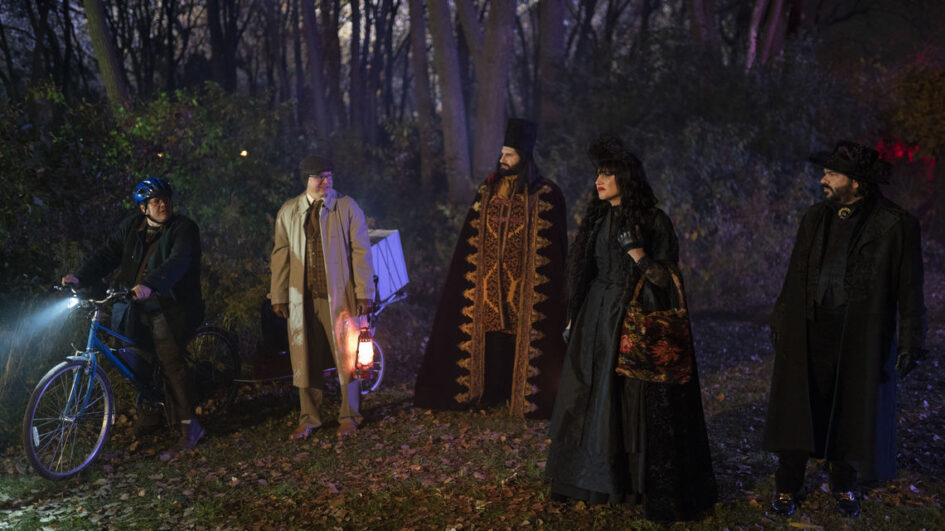 Vampires. Werewolves. Zombies. Necromancers. If you thought the first season of What We Do in the Shadows was epic, wait ’til you see what else creeps out of the dark for Season 2.

As the season premiere began, our unholy immortal trio of Nandor the Relentless, Laszlo Cravenworth and Nadja have successfully escaped from the Vampiric Council after being found guilty for the second death of Baron Afanas. While the vampires were trying out new familiars, Guillermo held off numerous vampire assassins around the clock, while keeping the results of his ancestry under his hat (let’s just say he’s a natural vampire slayer).

Despite his best attempts, Topher just didn’t work out. That’s why the trio chose to bring him back to life for a second go ’round — this time as a high-fiving Zombie that climbs walls and dances on the ceiling. The best part of this episode, besides featuring great guest stars Benedict Wong (Doctor Strange, Deadly Class) and Haley Joel Osment (The Sixth Sense), is that both of those guest roles were written so they can possibly return in later episodes. Here’s to hoping they do!

A ghost story is featured in the second episode, featuring unfinished business for each of the three undead monsters… so, who knew vampire ghosts were a thing? And what about ghost horses? By its conclusion, we haven’t seen the last of the ghosts. Perhaps there’s even a plot influence taken from Annabelle?

So, in back-to-back episodes, ghosts and Zombies are finally introduced to the show’s mythology. While the werewolf rivals haven’t yet returned, that doesn’t mean they won’t. What can we expect for future episodes? The guest star game will be grand this year, as leaks have confirmed Craig Robinson will leave The Office to check in. And who’s got more pop-culture clout at the moment than Luke Skywalker, himself, Mark Hamill? Can’t wait to see what he will bring to the show after claiming to be a superfan of Season 1.

Can demons and witches be far behind? While there won’t be another all-star cast of actors reprising their vampiric roles, is it too much to ask for Taika Waititi and Jemaine Clement to make some sort of cameo appearances before the season concludes?

While Guillermo longs to become a vampire, clearly Nandor doesn’t respect him or his wishes. This begs the point: How long will the ever-faithful familiar stick around to withstand the punishment? Hopefully the character’s everyday life will get more attention in the overall storyline. Maybe there’s a hotline he could consult to find another immortal host?

What We Do in the Shadows is quirky, bizarre, hilarious, silly with plenty of on-screen gags and meta moments. It’s a show that doesn’t take itself too seriously, sprinkling in many over-the-top scenarios that’s just incredibly fun to watch. While the DVR hard drive continues to get filled with movies and TV shows that will receive delayed viewings, Shadows is practically watched immediately, or as soon as the commercials can be skipped.