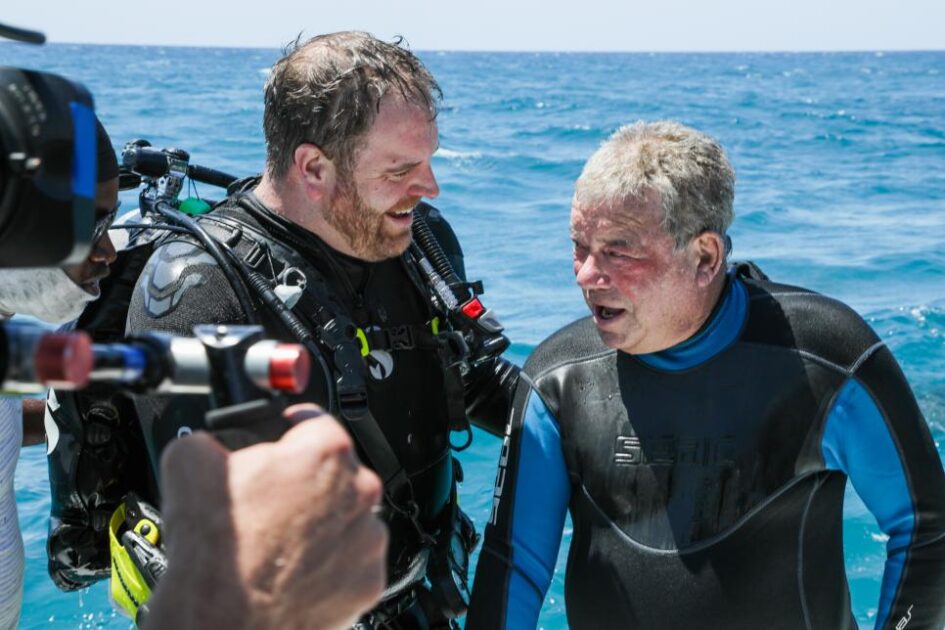 Per Matt
Still drying off from the splash zone of Discovery’s Shark Week, the 2021 edition dove to new depths for highlights galore. But before discussing the new, let’s swim with the fishes of the network’s offerings of yesteryear.

Previous seasons have brought underwater adventures to Shaquille O’Neal, Michael Phelps, Ronda Rousey, illusionist Andrew Mayne, Bear Grylls and Adam DeVine, just to name a few. These athletes, comedians and actors all put their lives at risk (somewhat), while appearing alongside so many cold-water killers… all in the name of science, of course. Which brings us to this year.

I can only watch so many shark attack reenactment stories. I’m really here for the excitement, intrigue, education and laughs, which is why I’ve come to love Discovery’s Shark Week every year. Science is fun and sometimes that involves inflating a 30-foot whale as a target to entice the appearance of an urban legend. It also involves reuniting the cast of the Sharknado feature film franchise and ask William Shatner and Josh Gates to face their fears in the Bahamas!

The Real Sharknado reunited Tara Reed with Ian Ziering, not necessarily to fact check the Sharknado franchise, but to prove that sharks aren’t exactly the bloodthirsty human killers as portrayed in the films. Lotsa breaking of the fourth wall made this one really enjoyable. Dr. Pimple Popper examined a different type of epidermis, Tiffany Haddish learned about shark sex (“She ready!”), Robert Irwin followed the footsteps of his father, the Jackass crew went to shark school (learning what NOT to do around apex predators), Brandon McMillan fully transitioned from Lucky Dog to become a full-fledged “shark expert,” Snoop returned to narrate another clip show and Brad Paisley wondered aloud, “Do sharks like country music?”

But the education didn’t take a backseat to the entertainment. Mothersharker took a team of scientists to the Bahamas in hopes of filming the live birth of tiger shark pups. Mechashark attempted to build a submersible in the shape of a shark in order to film great whites mating. Ninja Sharks explored the secret lives of threshers, sand tigers and salmon sharks, And Mystery of the Black Demon Shark attempted to fact check fish tales of El Demonio Negro.

That’s a lot to geek out to, all crammed into one week! The first-ever Shark Week series premiered, (Shark Academy, which is currently streaming on Discovery+), which is available to watch along with the rest of this year’s offerings on the network’s streamer.

There were lots of great jokes at Shat’s expense, which I absolutely loved. And for a 90-year-old, Shatner has been appearing everywhere lately, really enjoying a career resurgence in reality TV. From guest appearances on American Pickers, to Oak Island, to Ancient Aliens to hosting his own show, The UnXplained, he’s definitely earning a paycheck on the History Channel (and now on Discovery, too)!

This year’s group of celebrities really encouraged more education on these endangered species. I actually learned quite a bit while laughing a lot. And I cannot wait to see what next year’s events bring!