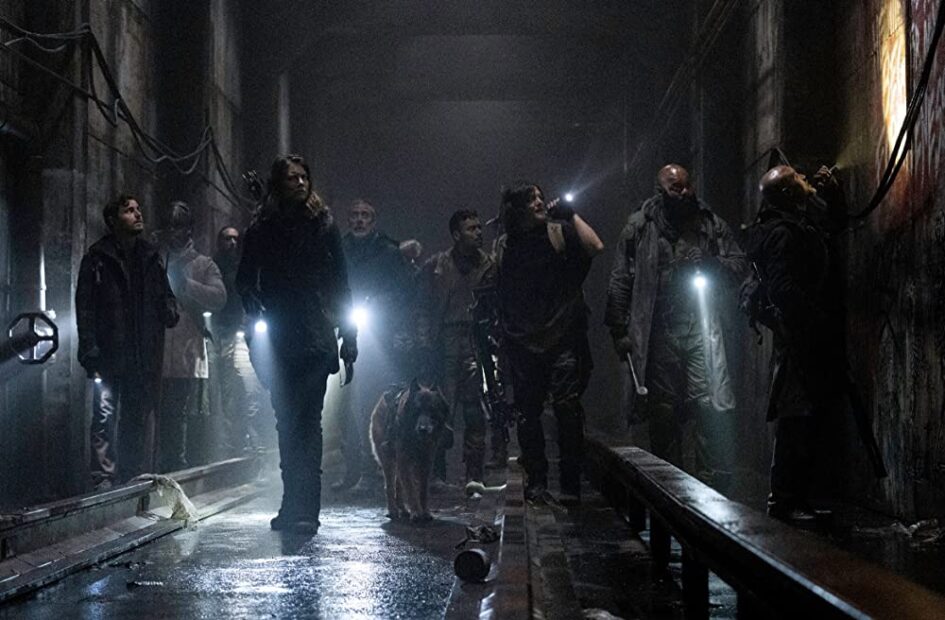 What's the end look like for AMC's The Walking Dead? And will it Just Survive Somehow?

I hate Zoom meetings. Wait a minute, let me clarify that statement. While I’m not necessarily a fan of sitting through online virtual calls, I absolutely despise Zoom meetings disguised as TV shows. I get it, in-person options are kinda limited during a global pandemic while a mutant variant is growing out there. But I don’t have to like watching it on television. It’s equally annoying when a Zoom call is substituted for a convention panel.

Going on two years now, many of the multi-genre conventions have temporarily closed up shop as a safety precaution until the situation improves. Until then, we’ve got Zoom “conventions.”

The beginning of the end has finally arrived as Season 11 approaches for The Walking Dead. Instead of making a presentation on Chris Hardwick’s Talking Dead (which I suspect will happen just before the season premiere), Comic-Con@Home rounded up the usual suspects for a virtual panel. Because watching a Zoom call is much more preferable than a trip to sunny San Diego…

Now, I’m not gonna force you to watch the almost hour-long presentation, but if you’re interested, the link has been embedded below.

So, what kind of information can we gleam from it all? Let’s start with the basics:

Nobody’s wrongly accused AMC of milking an undead cow past its prime. While details of the upcoming storyline have been shrouded in secrecy, Showrunner Angela Kang has proudly boasted a few factoids, “The stakes will be high – we’ll see more Zombies, tons of action, intriguing new stories, never-before-seen locations and our groups together in one community for the first time, trying to rebuild what The Whisperers took from them.”

The next intriguing factoid involves the season premiere’s date. For years, AMC was smart to pair new episodes of TWD around Halloween, when the general public was already knee-deep into the spooky season. And for the first time ever, the show will be airing two months earlier than its traditional timeslot. I understand the anticipation for seeing some of our favorite characters return to the small screen for all-new adventures one last time, but after that first episode airs, “Acheron: Part 1,” I predict a massive drop in the ratings, which will eventually climb to the sky by the time the series finale wraps.

From the looks of The Final Season’s trailer, it looks like our heroes’ visit to The Commonwealth will eventually lead to a showdown with The Reapers:

FIRST REACTIONS: It’s tightly edited, made to look like it’ll be action packed. There’s masked figures carrying weapons while creepy music plays in the background, feeling like an homage to John Carpenter’s Halloween. And for the first time, ever, it actually feels like this teaser trailer is previewing an actual horror movie. I have no doubt the pace will be much slower and far less action will be taking place on the screen, once the show airs. But it sure looks slickly produced, that’s for sure.

The Walking Dead Universe will live on without the mothership, as the resurgence of Fear The Walking Dead counters the last season of The World Beyond. And then there’s a series of feature films (currently in pre-production) that will bring the return of Rick Grimes and Michonne, among others. Plus, the Carol and Daryl spin-off show has already received the greenlight (with plans to premiere in 2022). Don’t forget the previously mentioned anthology series (The Walking Dead Should ONLY Tell Anthology Stories), which will focus on smaller, character-centric tales told through a variety of genres and media, which in itself is rife with spin-off potential.

I’m mostly interested in seeing if anyone from Fear will reunite with TWD before its story has finally been told. I don’t really care one way or the other about The Reapers after The Whisperer War. Needless to say, the mythology of the franchise will live on, through a variety of titles. And, I predict, many of these spin-offs will be quickly shuttled off to the network’s streamer, where it will forever bring in more profits to everyone involved and Robert Kirkman’s baby will Just Survive Somehow.