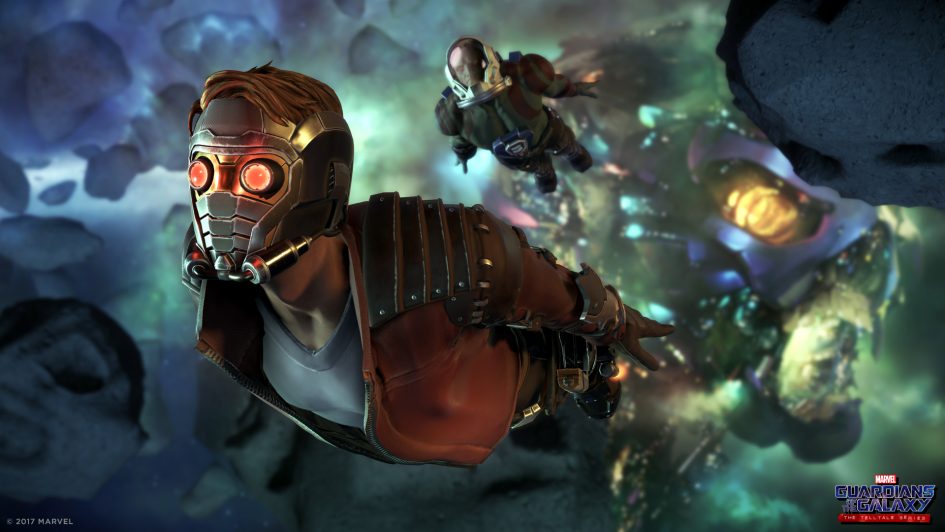 I really want, deep in my Guardians of the Galaxy loving soul, to like the Telltale Games approach to the galaxy’s favorite unlikely heroes. I do, but between the unavoidable nature of these games and what seems to have been a very-avoidable departure from what we know of the Guardians franchise in a modern context, it falls pretty flat.

Having enjoyed the Telltale take on a Walking Dead side-story starring Michonne well enough, but also having lost interest in their general Walking Dead and Game of Thrones attempts pretty early on, I did try to give this a 50/50 chance to hook me. That just never happened, and a lot of it is due to the game’s creators seeming to be entirely unaware of a huge factor in the success of the first Guardians movie: we were not familiar with the franchise for the most part, and most audiences only have the film to build upon.

Yes, there are die-hard comic book fans who’ve been living and breathing Guardians of the Galaxy for their entire lives. There is nothing wrong with that at all. For the rest of us, however, being thrown a curve-ball story that doesn’t take place in the Marvel Cinematic Universe (despite using all of its visual elements) can be off-putting.

We have a team of Guardians who have clearly already joined forces and have had adventures together. They have a full-grown Groot among them. This means it can’t be taking place after the first movie, unless it is also after the second, which would be a big spoiler for many fans. It can’t take place before the movie, as that story was a team-formation tale. In fact, it exists outside of the MCU.

Much of this would be less awkward if the release of this game were not timed to occur just before the imminent film’s sequel. Based on release, this game should serve as an in-between for the films, or precursor to the new movie. Instead, it feels more like a loosely rehearsed Comic-Con cosplay skit most of the time.

Adding to the would-be MCU setting is the soundtrack, which this game ironically gets right, despite the overuse of one of the tunes. Various visual elements of the interface have a lot of retro charm, as well (cassette tape for loading, 3.5 inch floppy for saving progress…). Overall, the music may be the best thing this game has going for it.

Despite the MCU training all of us to believe Thanos is the ultimate villain, and a massive bad-guy payoff we’re salivating to reach in the films, we open on our team taking up a hot pursuit of the titan. Before long, we’re in the midst of a hand-to-hand showdown with the big-chinned champion, and the plot quickly becomes an oddball soul-searching drama concerning which entity to sell off the intergalactic corpse the heroes are foolishly toting around in their ship. What could possibly go wrong?

We don’t find that out, at least not yet. Instead, we jump down the rabbit hole of Star-Lord’s past, with visions of his mother haunting him by way of an artifact recovered from the battle. Some of the ham-handed conversational choices offered in the game’s mechanic occur within these visions, which seem grossly unrelated to the overall tale. In fact, that’s the biggest issue. The first episode of this (forthcoming) five-episode adventure seems to dizzily stumble around looking for direction, not unlike the stumbling you, the player, have to endure when navigating the in-game space.

Telltale’s games do suffer some frustrating user-interface traits. Often, the presented choices are illogical or feel forced for the sake of making the story drag along. Occasional puzzle elements insist on being sequentially solved, despite the player’s ability to notice the solution prior to visiting the “clue” — but you will damn well mark that clue-visit off your list before being offered the solution. Rooms and spaces have an annoying “fourth wall” — in that you cannot fully navigate or rotate 360-degrees in the space.

Those are not new or surprising factors, but when the story lacks true pizzazz, and the attempts at comedic timing fall victim to the game’s tedious pace and mechanics, there is little to be excited about here. Even the most painful player experience might be worth it, if this were an enticing pre-sequel story, intended to whet our appetites for the last couple of weeks before the Guardians “rocket” back into theaters. Instead, it is a bit of a bush-league distraction that crash-lands all its potential through what seems to be bad business decisions and shaky writing.

The next four episodes deserve a chance to redeem the game, overall. Perhaps the release schedule will help make it fit better as a side-story, once we see the movie.

Perhaps I’m just too old and too analytical for this one. That’s possible, too!

Regardless, this episode gets a two-out-of-five rating so far, with final judgment on the collective game being held for a couple more installments to potentially correct course.