The Soska Sisters Get Rabid 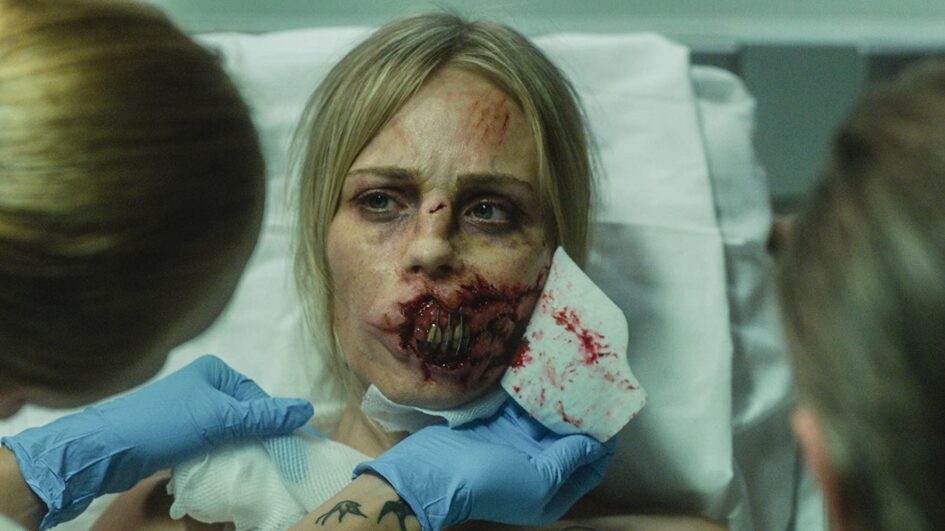 Per Matt
Medical experiments gone wrong have been a mainstay plot device within the horror genre for years. During this time of the Coronavirus pandemic, self isolation, quarantine and emergency operations can get even scarier. What better time to get Rabid?

As if The Soska Sisters — the writing-directing-acting-producing filmmakers who breathed new life into David Cronenberg’s original film — were asked by the viewer, the first line of dialogue in this film gets straight to the point: “Why do we keep remaking old trends? How are we breathing new life into the old? Are we adding something new?”

Their answer soon reveals itself.

After a traffic accident leaves an up-and-coming fashion designer hideously disfigured, she turns to transhumanism experimental surgery. But there seem to be some killer side effects, creating a monster in her new life. Stem cell manipulation may have evolved into a mutated hyperactive strain of rabies. These vivid hallucinations turn into bloody nightmares. Has Rose actually become a psychological monster, haunting and attacking herself? Or has she been overcome by blood lust?

Glad I caught Rabid on Showtime Beyond recently. The Soskas’ take on Cronenberg was enjoyable, especially during this strange time of a global pandemic.

Quarantining the victims isn’t address until it’s too late, but they aren’t exactly Zombies, more like bloodthirsty vampires than humans. I really enjoyed the quick black-and-white nightmare, which somehow felt like it involved stop-motion. It was a highlight, I only wish there were more. I liked this movie and I really do wish Cronenberg would return to bring his special sauce of batshit-crazy horror films to life. Having a Soska Sisters-Cronenberg collaboration would be an even better treat for horror fans everywhere.

I actually met the Soska Sisters years ago at a South Florida horror convention. It was only a quick conversation and they were very nice and engaging. This was, of course, several years before they remade Rabid. And that means it was also several years before Twitter wrongly suspended their account for promoting the film. Unjust censorship of any kind is unfair and wrong, but targeting independent artists, specifically within the horror genre, and banning their social media accounts cannot be tolerated in the 21st century. Unfortunately, this has happened to multiple artists on a variety of platforms, including Instagram and Facebook.

I agree with Danno of the Dead when he states that horror is healthy and if we don’t defend horror, it will soon be wiped out from all social-media platforms… but why stop there? If some people have their way, who’s to say it wouldn’t eventually disappear from television, streaming services and even movie theaters? What about book stores? While I don’t foresee that happening anytime soon — and hopefully it really won’t — to borrow an often-used phrase, “Who watches the watchers?” And who will oversee them, to make sure they’re fair and balanced?

Definitely check out The Soska Sisters’ Rabid and while you’re at it, get vocal with supporting your favorite indie horror artists. Don’t let them wrongly disappear into the cloud of the internet. Get loud and get Rabid with your support.