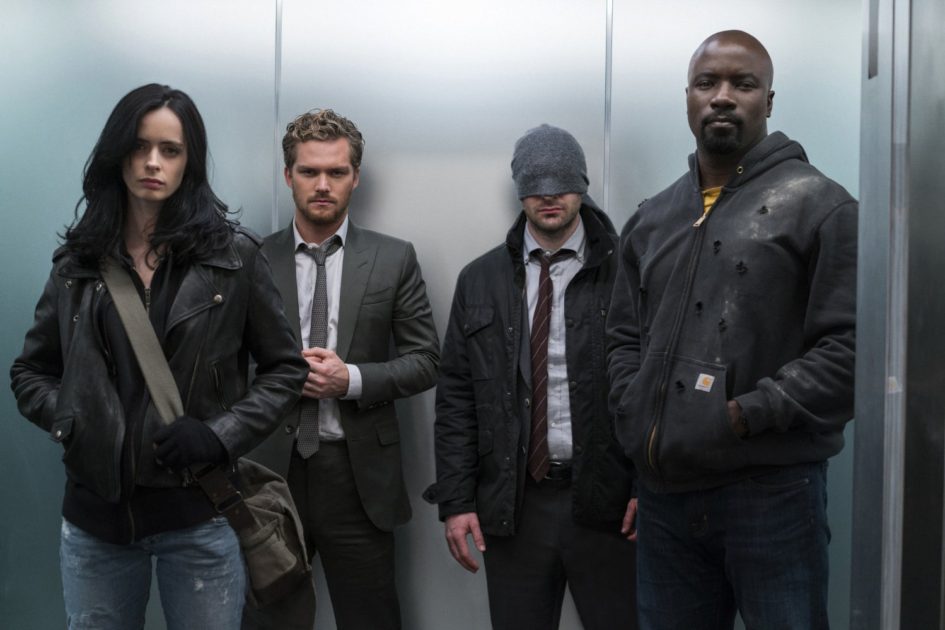 The Defenders - Photo by Sarah Shatz/Netflix

The Defenders is Marvel’s Netflix-level answer to The Avengers. It’s your first chance to see the headliners of four separate Netflix series (Daredevil, Jessica Jones, Luke Cage, Iron Fist) come together for the first time. Elements of all five previous entries (Daredevil has had two seasons, to each other series’ one) come together, with mixed results.

First, fans will be happy to know that each character retains their own unique “voice” from their own TV show. In fact, the first episode surprisingly takes its time setting up the story, introducing each character, while emulating the style of their show. Matt Murdock (Daredevil) is shown fighting for the downtrodden in the courtroom. Jessica Jones is tossed out of a bar, having both closed it down and opened it back up. Danny Rand (Iron Fist) is having nightmares about his failures at the end of Iron Fist, and music continues to help drive home the identity of Luke Cage, as Luke gets an early release from prison to an appropriately hip-hop soundtrack.

I’ve seen some outlets that have called the first two episodes slow or boring, but I can’t help but disagree. These characters are not really in the orbit of one another, and they have to find their way together. This is deliberate storytelling, giving the characters a chance to breathe and establish themselves before fate throws them together.

And once they are thrown together, the series gets explosive. The first time all four characters are on screen together is during a terrifically choreographed fight (in a hallway, because Marvel Netflix). The building up of two-and-a-half episodes is totally worth the wait, and when the show pauses to take a breath in the next episode, the character interactions are pitch perfect.

The Defenders has also taken one of the weaker aspects of the previous series and managed to improve it: Danny Rand, the Immortal Iron Fist. While the character still isn’t perfect — Stick calls him a dumbass, and is proven right at least twice — Finn Jones seems to be having way more fun here than he did in his solo outing as Danny. This mostly comes from two things: First, the fight choreography is miles better than anything that Iron Fist had to offer (though not as good as either season of Daredevil), and second, his chemistry with the other heroes. In fact, pairing Danny with Luke Cage livens up both characters, something needed for Luke, as he was overshadowed by a much more bombastic and engaging supporting cast in his own show.

However, what The Defenders giveth, The Defenders also taketh away. The big bad organization known as The Hand is still a muddled enigma. Where The Defenders gave new urgency and purpose to Danny Rand, The Hand seems to have undergone another facelift. Despite good performances from most of The Hand leaders, they never seem to gel as a cohesive threat. This is surprising, after how deadly they seemed in Daredevil Season 2. But while they were dangerous in Daredevil, their plan never really made any sense. The Hand may have a plan in The Defenders, but it’s almost so simple, it feels inconsequential. Their inconsistency across previous series and the lack of any real physical threat, outside of Elektra, makes them feel almost like an afterthought. They have been retconned and retrofitted into a plot that doesn’t quite mesh.

And yes, Elektra is back, resurrected as the Black Sky, something that is still not ever actually explained. She is supposed to be an ultimate weapon, but seems incapable of accomplishing tasks that could have been accomplished by previous Daredevil villain, Nobu.

In addition to the return of Elektra, there are supporting characters from all of the previous Netflix series present, but they don’t really do much, aside from Claire Temple (because Rosario Dawson) and Colleen Wing, who is still sidelined for most of the run, despite being one the few people actually equipped to deal with The Hand. It was nice to see them all again, but I really wish that more could have been done with them, though they do all get their moments.

The Defenders is the perfect stopover for anyone who wants to spend more time with these characters. It’s fun to see them all together, playing off each other in both predictable and unpredictable ways. However, be prepared for the occasional clunker piece of dialogue and the same pacing issues that seem to plague the back half of each of the Netflix shows, so far.

Hopefully, next time a stronger central narrative will complement the terrific ensemble.