Greetings, fellow creepy guests. This week in #HauntLife, I am going to review the 2017 TransWorld’s Halloween and Attractions Show that took place March 24 to 26 in St. Louis, MO. This annual trade show covers more than 500,000 square feet of space in the America’s Center Convention Complex. If you are in the haunted attraction or escape room business, this is the one show you cannot afford to miss. That’s exactly why yours truly makes the trip every single year. I am always excited to see what’s new in haunt tech.

In years past, the wife and I made our visits to St. Louis more of a vacation than anything else. We head out earlier in the week, take our time getting there, and then spend time checking out what the city has to offer. This year, however, we couldn’t do that. The little missis had college classes to do, so we did not get to head out until early Friday morning. Which was fine with me: I had already taken the week off from work.

I have to say something about the road trip. This goes for Illinois and Western Kentucky: PUT SOMETHING TO FRIGGING LOOK AT ALONG THE WAY! The landscape there is just depressing. Nothing but flat fields that extend for miles. With the exception of the Big Muddy River Correctional Center (ie: prison) we drive by, there is nothing to see. Entertain me, Illinois!!!

We reached the “Gateway to the West,” we checked into our hotel room, headed across the street, and got our badges for the show. The original plan was to get something to eat, since it was right at lunch time, but once we got inside, the pull of the noises coming from down the hallway beckoned us to enter. So, we took off to the convention floor.

As soon as we walked in, it felt like home. One of the top manufacturers in the haunt industry, Gore Galore, had their gigantic animated monster heads greeting people with roars and screams. Ghost Ride Productions, a company that prides itself on some of the most realistic fake cadavers in the world, had all of their new “dead dolls” lined up for inspection. The senses are on overdrive here, as the sounds, sights and smells (yes… smells) overwhelm you. 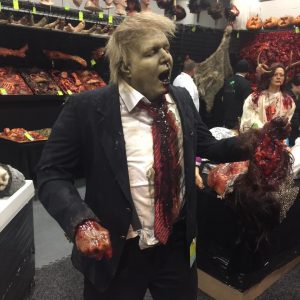 Reminds me of someone. Just can’t put my finger on it….

We spent maybe 90 minutes walking the floor, and barely got through three rows of vendors. There was just so much to see. Our first visit ended with a stop by Froggy’s Fog, the top sponsor for TransWorld. Something immediately caught my wife’s attention. She saw bubbles flowing out of a blower, but not just any bubbles. These bubbles were filled with fog. When they popped, out came a puff of smoke, giving a really cool effect. One of Froggy’s team members came over and explained that this is a new product they were debuting at TransWorld. Since it combines their bubbles with fog, it is something new and unexpected. Not sure I can think of a place in a haunted house where it could be used, but it was an interesting concept.

Another product debuting at TransWorld from Froggy’s Fog was their “swamp room kit.” This system combines laser lights and a low-hanging fog. The laser lights cut a line through the fog, making the floor impossible to see. However, an actor crouched down will have a clear line of site to any person walking through. I talked to one of the salesmen there, and he told me that they had sold tons of them in one day. So, I definitely will tell you now that this concept is coming soon to a haunt near you!

While checking out the Froggy booth, I ran into the owner of Folklore Haunted House in Acworth, GA, Dan Riker. He was visiting the booth to check out the new smells they had this year, including “Volcano” (full disclosure: I have no clue what a volcano would smell like, but I am hoping it is not that rancid odor). I asked Dan if there was anything this year he was looking for, to enhance his already top-rated haunt. “This year, we have our eyes on several new props. Last year, we made some big changes to the haunt. So, mainly, this year, I am looking to just fill in the new gaps we have,” Dan said. Checking out what scents he was buying, I am sure it is going to be another blockbuster year. 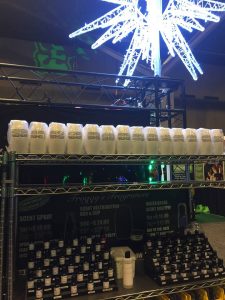 After getting some lunch, we returned to the floor and checked out some more of the show. Nevermore Productions had an amazing looking shipwreck set. In our walkthrough, the floor actually dropped away from under us, giving us quite a shock. It was supposed to happen, as it immediately reset, but man, that was a surprise I was not expecting. While this may be one awesome prop (and I know at least one haunted house that will featured this in September), the drop may need to be tweaked some. Old knees + drops = bad things.

Masks are always a big thing at TransWorld. The main players were all there. CFX, Immortal Masks, and Shattered FX had some new creepy designs. One that caught my eyes were these new “light up” silicone masks at the Immortal booth. I always have liked their products and so happy to see them setting the bar in the silicone mask business. 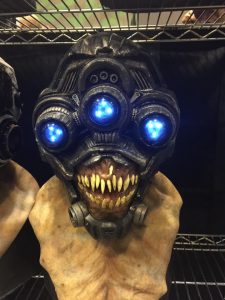 “Do I have something in my teeth?”

Moving down to the Escape Room City, as it is affectionately called, we started checking out products that will impact the gaming industry. The big thing we saw was the introduction of virtual reality. There were at least five different vendors selling different versions of this technology, all aimed at replacing the tactile experience with a virtual one. The idea is to save money on props and design and do it all within the confines of virtual space. I tried out one of these systems, and frankly, I was not impressed. The technology is getting there, but there is something about losing the feeling of being physically immersed that is just not happening with some goggles on. The pricing on these was a little high in my opinion, as well. One I looked at (cannot remember the name) was $3,000 per player, per game, plus $1,000 for the goggles. I figured it up at being $36,000 for eight players and having 12 headsets (just in case someone breaks one), and you haven’t bought a computer, and have an empty room that looks… well… empty. I just don’t see this being the future.

Other than these things, I honestly have to say I was not impressed with the offerings this year. Nothing really jumped out as amazing, and the things that were supposed to be “game changers” failed, in my humble opinion. But this is how the industry goes. Some years it’s all about innovation. Others it’s all about maintaining. 2017 just happened to be one of those years, in this reviewer’s opinion.

In the next episode of #HauntLife, I will be going back to my Troma film reviewer roots. Be sure to come back and check it out!