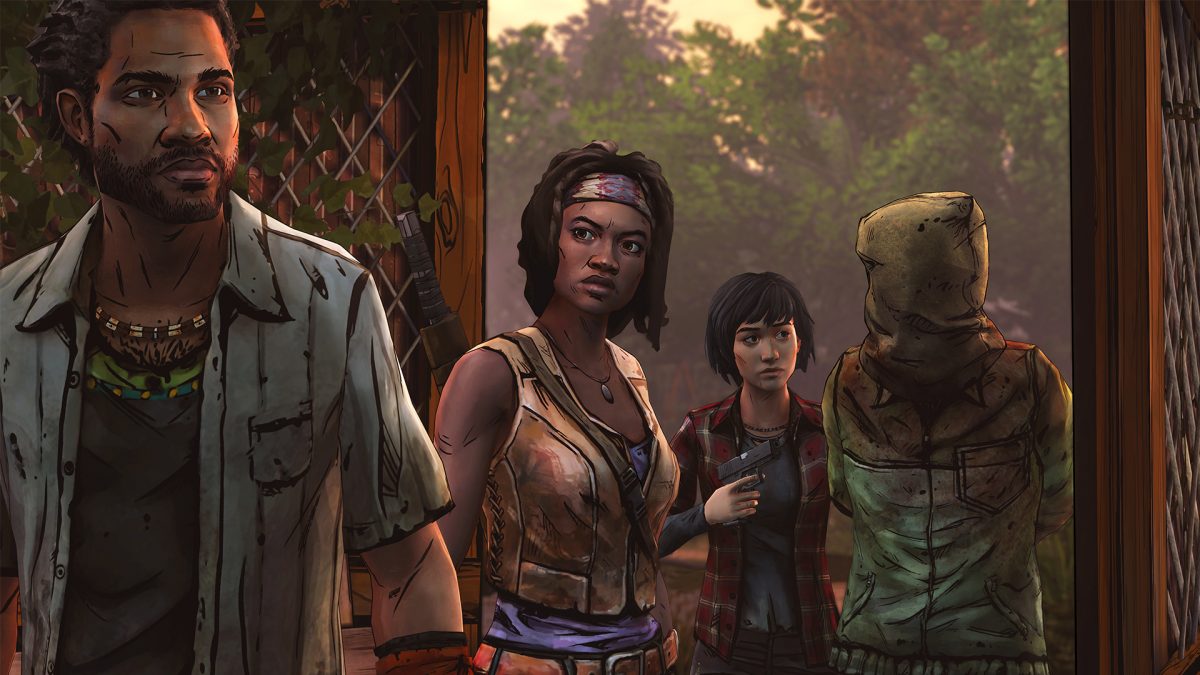 For any of you who have had a chance to play Telltale Games’ The Walking Dead: Michonne, these questions are etched into your brain by the beautiful and haunting opening credits song for the game by the band, Dorothy. And since this game is pretty much all about choosing your own path, they seem extremely fitting. I mean, ever since Episode 1, I have been waiting for the chance to jump deep into the world that left me hanging, wondering what is next! Yes, I did miss my review of Episode 2, so if you don’t mind, in this episode of #hauntlife, I plan on fixing the grievous error.

Episode 2 is aptly titled Give No Shelter. The story picks up right after the tragic and heartbreaking climax of Episode 1. Michonne and Pete have found themselves wrapped up in what seems to be a war between a couple of teenagers and a band of people led by Norma and her brother, Randall. Michonne and the female teen, Samantha, manage to escape from their captors, but in the process, destroy the settlement and lose Sam’s brother, Greg. Sam suggests they flee to her father’s home and along the way, is shot in the shoulder by Randall. Weakened from blood loss, Sam collapses and Michonne must carry her the rest of the way home. Once there, Michonne is able to save Sam’s life, while still being haunted by the images of her two missing children.

The strongest WTF moment I think I have ever had playing a video game came moments later. I won’t spoil the moment, but the after effects carry over into Episode 3 and really took my breath away. After this moment, the pursuing militants from Norma’s camp, led by Randall, attack the house, but are stopped by Michonne and the family. Randall is captured and taken hostage as a bargaining chip to get Pete back from Norma unharmed. After conferring with Norma on Randall’s walkie talkie, the epic final battle seems to be looming.

And now onto Episode 3…

What We Deserve is the title of the third and final chapter for TWD: Michonne. Picking up from the end of Episode 2, Michonne, Paige, Sam and her family prepare for the upcoming battle. Trying to be stoic, Michonne is lost in many hallucinations about her two daughters, who she believes to be dead. Being the total bad ass she is, Michonne is able to work through it and prepare for the war that is coming to her doorstep. Norma is not going to like how her brother was treated and reveals she captured the rest of the crew of The Companion. Now, with so many lives on the line, how will Michonne ever find a solution to save them all?

I don’t want to get too deep into spoilers, so let me give you my take on this episode. With the first two parts so strong, I had so much riding into this final part of the game. Nothing short of amazing would have satisfied me. So, maybe that is why I felt like this part just fell off the rails. While I had grown invested in learning more about Michonne and seeing how the loss of her children created the Zombie-killing ninja we all know, I felt like too much time was spent “in the past.” Maybe those are not the best words to describe it. Maybe it should be too much time was spent “in the past” with no real conclusion. I find myself not really knowing any more than I did when I started the game. I felt all the time that had been invested in this part of her story was just wasted.

I also feel like the battle was rushed, in some aspects, and the aftermath really did not bring anything together. Think back to the television series in Season 4, during the attack on the prison. That battle climaxed way too quickly and all that was left was cleanup for a majority of the fight. Same feeling here. I felt like it peaked, then kinda leveled off, even though the story wanted to climb again. It just didn’t feel like all that intrigue and build-up paid off for me.

So, for Episode 2, I give it 5/5 stars. It had the WTF Moment of the Year for me, and left me waiting patiently for 4/26, when Episode 3 hit the market. But for the final chapter, I can only give it 3/5 stars. It was a good game, but to me, the climax and ending just didn’t match the previous hype. I still recommend playing it, as it will envelop you for a while. And always remember, the views I express don’t always match the rest of the playing populace. Definitely worth playing!