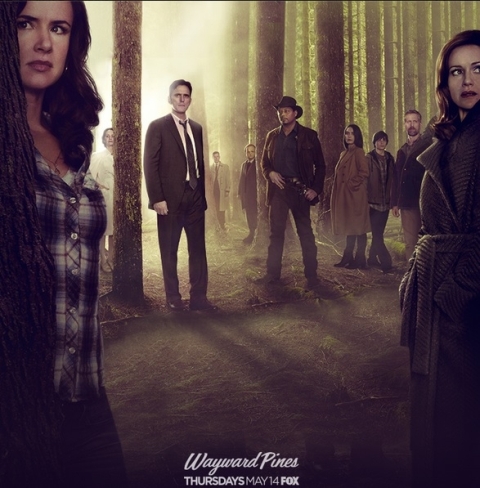 Without knowing any of the specific details, if you were told there’s a TV show that’s altogether creepy, spooky, mysterious, strange and possibly ooky, would that pique your interests?

The series in question is Wayward Pines. While it’s not The Addams Family, it feels like a hybrid from The X-Files-Twin Peaks mold, added with a dash of Big Brother.

When Secret Service Agent Ethan Burke (Matt Dillon) awakes from a concussion, he’s a bloody mess, mixed with a dash of amnesia. He’s unsure what exactly happened. Supposedly, he survived a bad car wreck, but his car (along his partner) is nowhere to be found. Apparently, he’s in Wayward Pines, Idaho, but nothing about this middle-of-nowhere town feels right. Unable to make contact with his coworkers or family, he eventually discovers the remains of his missing partner, who’s been tortured and dead for quite a while. How long, exactly, was he passed out?

Nothing is quite what it seems in Wayward Pines. Burke has a history of mental illness and a psychiatrist is worried that he’s seeing hallucinations after suffering from a concussion. Vague hints slowly unspool, but there are enough red herrings to make you wonder what, exactly, is real and what isn’t. By the conclusion of the series premiere, it’s suggested that this place could be a social experiment, time loop, nightmare, another world or even purgatory. Hopefully, it’ll get a better conclusion (and therefore, a REAL explanation) than LOST.

The first episode, Where Paradise is Home, features minimalist storytelling at its finest. There’s even some mysterious numbers involved: 10-16-28. Another callback to LOST. Nice touch.

With all the big-named actors attached to this series, the subject matter can’t be ignored. In addition to Dillon, Academy Award-winner Melissa Leo’s Nurse Pam is super creepy, Terrence Howard’s Sheriff Pope has a thing for ice cream, Carla Gugino is Burke’s coworker and former lover, Shannyn Sossamon is Burke’s distressed wife, Juliette Lewis’ bartender seems to be the only sane person in this small town and Toby Jones’ evil Dr. Jenkins may (or may not) be running this crazy little hamlet.

Now that you know all of those details, know this: Wayward Pines is adapted from a series of novels by Blake Crouch. While that may not be a deal breaker, knowing that M. Night Shyamalan is the Executive Producer of the series might be. While he has had a considerable amount of feature-film duds lately, this format feels perfect for Shyamalan, so you should at least try on the pilot, to see if it fits. Give it a shot. You might be shocked that you’re hooked, just like me.

Barely any details are given, but just enough to suck you into the story, so I’ll be combing through each of this season’s episodes, trying to decipher the clues. In a summer chock-full of reruns, reality programs and very bad television, Wayward Pines has an original voice that might have been overlooked any other time of the year.

Can’t wait for more of the mystery to be revealed…

Strength: There’s a lot going on… but it feels like it’s not.
Weakness: Slow-burn story, preparing for a M. Night Shyamalan gotcha moment.
WTF Moment: How do you classify this show? Is it a thriller, mystery, drama, horror or none of the above? Watch to find out!