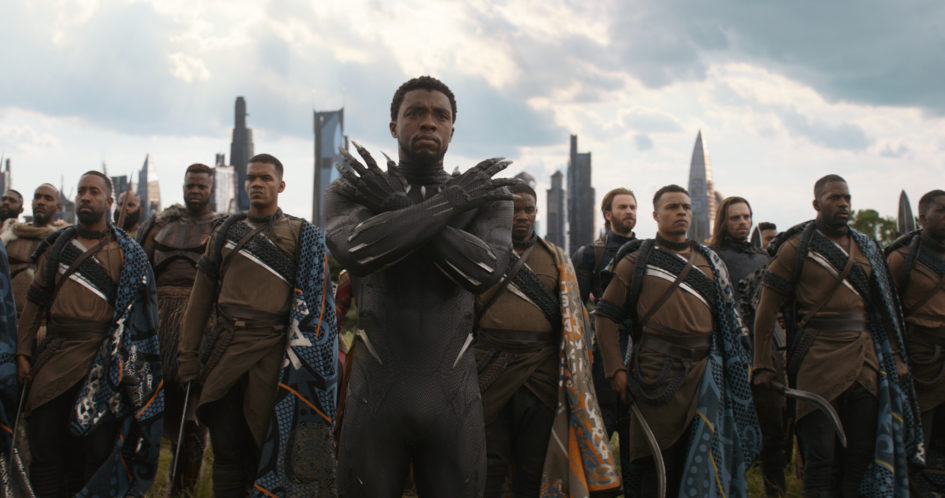 Superhero fans can finally celebrate the official introduction of Thanos into the Marvel Cinematic Universe this week as the character hits the big screen in Avengers: Infinity War, appearing in more than just a post-credits scene. But before we approach the final destination, how exactly does Black Panther fit into the already-convoluted MCU timeline?

For some reason, the chronological order of Marvel Studios’ Phase 3 films have been difficult to decipher. In order of their theatrical releases, Phase 3 includes: Captain America: Civil War, Doctor Strange, Guardians of the Galaxy Vol. 2, Spider-Man: Homecoming, Thor: Ragnarok, Black Panther and the upcoming Avengers: Infinity War, Ant-Man and the Wasp, Captain Marvel, followed by Avengers 4. That’s 10 movies — which is a good thing — but trying to decipher the ongoing order of cinematic events is not so good.

Cap no longer dons his vibranium shield. Strange has new powers, but disapproves of Thor appearing on Earth. The Guardians have gift-wrapped a gem for the Mad Titan. Spidey’s still growing as a teenager (and a superhero). Thor has lost his home planet. And how long has it been since Bucky Barnes lost his arm in the Civil War? After the post-credits scene in Black Panther, he’s still armless — now going by the name, White Wolf. Surely, T’Challa wouldn’t have already forgotten about his ally, could he?

Black Panther was a break-out hit for the MCU, becoming the highest-grossing film of 2018 (so far), clocking in at more than $1.3 billion worldwide, featuring a mash-up of action, adventure, sci-fi, fantasy, and heist genres dealing with African history and culture, revolution, colonialism and isolationism within its storyline. It literally offers something for everyone. With a portion of Infinity War taking place on the Panther’s home turf of Wakanda and the storyline that’s built up for 10 years, through 19 films (and growing), there’s even more on the line for these characters. Sacrifice and a changing of the guard is bound to happen at some point, and it seems like Thanos is the one Big Bad who will finally serve it to these heroes.

In looking up the timeline for events transpiring within the MCU, even the filmmakers have goofed on at least one of the dates. Most likely, it’ll be cleared up with some editing on the next home video release of Spider-Man: Homecoming, but until then, it’s still a mess trying to figure out what happened to whom in chronological order. Until then, here’s what we’re anticipating for Infinity War:

Vision’s gotta cease existing for the Infinity gauntlet to be complete. Has Hawkeye officially retired yet? That might explain why the character isn’t displayed on any promotional posters, but what’s the actual reason for omitting Ant-Man? Cramming so many Oscar-nominated actors into one movie, who will receive the short end of the stick, story-wise? Will Captain America actually survive? Chris Evans’ contract is almost complete and he has loudly hinted that he’d like to do other projects, so it seems like the closest to a definite answer that fans will ever receive.

There’s so many questions to ask, but very likely, there won’t be too many answers when Avengers: Infinity War gets released this week. Hold on for the ride. It may be a bumpy one.