Gutboy: A Badtime Story Brings Back the Art of Puppetry 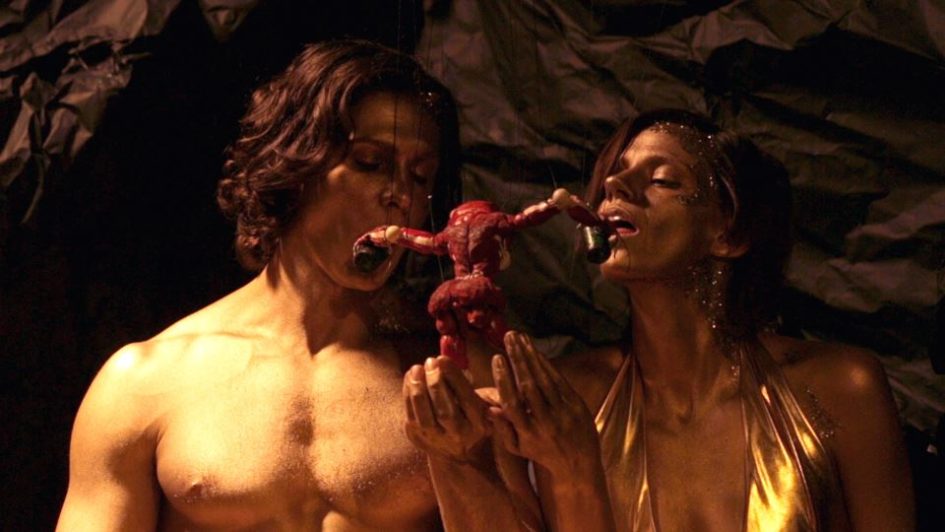 Welcome back to a new episode of #HauntLife. This week, I will be reviewing Nick Grant’s Gutboy: A Badtime Story from Troma Entertainment!

I have to say, when I first looked at the synopsis of this film, I was not very impressed. Having a lot of things going on with my work and getting ready for another Zombie Apocalypse Live event at Nashville Nightmare, plus working on some stuff for the new haunt, Priest Lake Haunted Woods, my free time has been extremely hard to find. But I have learned over time not to judge a book by its cover. Sometimes you get pleasantly surprised by what you find.

Gutboy’s story begins with his origin. One day, while sitting in the nude and fishing, a weird man named Besto shows up wanting to buy his fishing rod, but our hero refuses. The man then offers to buy his skin, and after some really bad singing, Gutboy accepts the offer.

Immediately afterward, a skinned mermaid witch shows up and offers to grant Gutboy wishes in exchange for kisses. Gutboy asks to marry the beautiful Sophia. Begrudgingly, the witch agrees and runs off to find Sophia.

In an attempt to win over Gutboy, the witch gets a marriage license from the town clerk, then attempts to switch bodies with Sophia. However, Sophia outsmarts the witch, and in the struggle, the good parts of Sophia and the witch’s personality combine in the witch’s old body, leaving the evil sides in Sophia’s. The good part calls herself Sophiaguts Prettybutts, and once she finds Gutboy, they come up with a plan to nullify the marriage.

I will leave off the finish to this film for you to discover. #OnlyPartialSpoilers

Gutboy: A Badtime Story is almost fully done with puppets. Not stop-motion animation or CGI, but real puppets. In every scene, you see all the marionette strings being used to make these characters come to life. It’s kinda refreshing to go back to this type of cinematography. Honestly, I cannot remember ever seeing a film done this way. I did see some Howdy Doody episodes on Youtube that had it, but that is about it. For that, I have to give this production team high praise.

As I was watching this film, I started to think, “Is there anything I can compare this to?” The film is very unique in class, not only ’cause of the puppetry, but also with its storyline. I would have to say the closest film I could find that matches this would be something like the Rocky Horror Picture Show. Like RHPS, there are a lot of musical breaks in the film to help convey the story. But then there are some scenes that look like they’re thrown in to add time (kinda like when I throw in haunted house stories in the middle of movie reviews… lol), like the wrestling match between the Golden Giants (two of the only real humans in the whole film), or the one-minute countdown to solve the riddle from Sophia (which again also features the Golden Giants). They seemed so out of place in the film that there is no other way to explain them. That being said, their level of “oddness” makes them memorable moments from Gutboy.

On the special effects side, which I also grade when watching a film, there is not much to say here. Since 99 percent of the film is done with puppets, there is not a lot going on. In fact, I would have to say the budget for special effects in Gutboy is probably around zero. Not knocking the film for this, as the puppetry made up for it and probably could be considered FX in its own accord.

I would have to say I give Gutboy: A Badtime Story a solid five for five stars. To think I was going to pass over this film makes me sad. Nick Grant and company made a solid film full of “WTF” moments and songs that had me humming along and wanting more. I just hope Nick and Troma work out something so that a Gutboy 2 film will come along. It kinda falls into that category of films that my wife calls “so bad, they’re good.” If a sequel does happen, don’t change a thing in the production. It all worked beautifully in this film, and I would hate for the magic to be lost later.

If you want to check out Gutboy, head over to Troma’s streaming media site, Troma Now. You can get a free trial membership, or pay the super-low monthly fee of $4.99 to see an entire treasure trove of amazingly awful/awesome films.