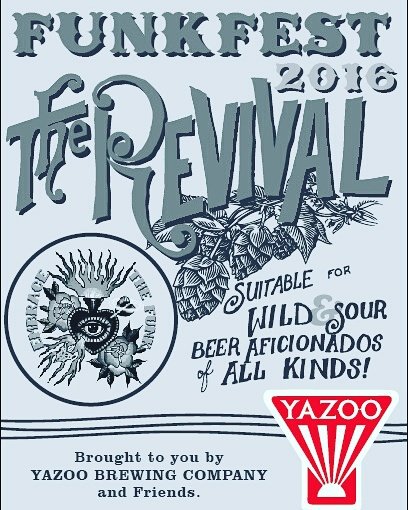 Per Matt
Nashville’s about to get a bit funky when the 2016 Funk Fest returns to the Music City on May 14. Hosted by Yazoo Brewing Company from 1 PM to 5 PM, this craft-beer festival featuring wild and sour beers will take place on a Saturday for the very first time, this year.

Appearing at the fourth-year festival, there will be craft-beer industry guest speakers, special craft beers only available at the event and an exclusive bottle release only available for festival attendees. Just in case you’re interested in attending this event, you’d better act quickly. Within 90 minutes of tickets going on sale to the general public, half the ticket allotment has already been sold. For an event that sells out every year, the quicker you purchase your tickets, the better.

“Do not sleep on these tickets,” proclaimed Brandon Jones, head of Yazoo’s Embrace the Funk souring program. “I promise you’re going to be upset if you miss out, this year.”

Previewing the event, I spoke with Mr. Jones in an attempt to uncover the secrets behind this year’s festival, including a collaboration beer and the revelation of a guest speaker appearing at the craft-beer celebration. 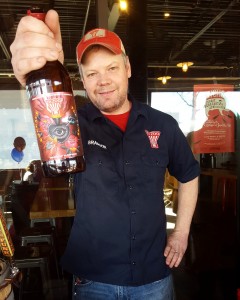 Please tell me a little about the first Funk Fest.
– “The first Funk Fest happened in 2013. The first year it took place only inside the brewery, but the past couple of years, we’ve had to expand outside a little bit. It kind of grew and moved into the parking lot, upstairs and beside the silo, as our space got more limited from bringing in larger tanks.”

What can people expect at Funk Fest this year?
– “A lot (laughs). I’ve got to be a little coy on it. Part of the thing that started out with Funk Fest is we had a lot of people buy into a festival that was based on a very specific beer style. Nobody else had done one in the state, centered around sour and wild beer and funky cheeses. So, we had this bit of secrecy, going into the fest, that I think people enjoyed. They had no idea what beers were going to be there. We never release a beer list before the day of the event. We will tell some of the breweries that will be here, especially the people who give talks, but we like to keep some of those fun secrets. I don’t feel like we’re hiding any information from people, because this is our fourth year doing it and people have enjoyed it every year. I think they enjoy the surprise: What’s coming up next? What, in the world, have they got planned for us, this year?”

“What I can say is we will definitely have another special bottle release. The big change, this year, will be bottles labeled as “Funk Fest,” and not ETF bottles. It’ll still have the ETF logo and will be produced by ETF, but it will be branded as a Funk Fest 2016 bottle and it will be a festival exclusive. In previous years, we have sold the extras the following week in the taproom. We will not do that, this year. So, if you want to buy the Funk Fest beer, you HAVE to be at Funk Fest and you need a ticket. If there are some extras, we’ll allow extra purchases, but the beers have come pretty close to selling out, each year.”

Is there any chance for more Funk Fest beers being released, throughout the year?
– “Probably not, because we do have our own program — The State of Funk — for other limited-edition beers that don’t make it to the public. That’s all of our single-barrel and unblended batches that we produce, just for our citizens. I’ve already committed myself to making eight of those, each year and the Funk Fest beer will be beer No. 9 that I’m making that will never be released to the general public, only available to citizens and attendees of Funk Fest. Nine is probably getting to my limit that I’m only able to produce 200 to 250 bottles of, at a time. I’m really trying to concentrate on growing the beer program. I would really like to see ETF, more, as a shelf beer and then transition more of our rare stuff into The State of Funk program, where I have a known number of bottles to produce. That still gives me the creative outlet to try different fruits, spices, herbs and barrels.”

“I feel like we’ve established flagships like Deux Rouges — which we’re brewing twice as much as we did last year. We’re brewing twice as much Bret Saison, Berliner Weisse and Delicieux. We’ve got four or five flagship beers that I’m trying to make as a large seasonal/year-round type of thing. I’d like for those beers to be sold, basically, year round. Having them sold as a shelf beer would be a huge accomplishment. People shouldn’t have to go to the ends of the Earth, just to enjoy a good beer.” 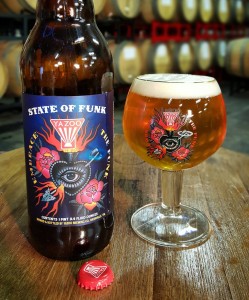 What can we expect from the craft-beer industry speakers appearing at Funk Fest?
– “Funk Fest was always about throwing a party, but it was also about having the opportunity to educate people on these styles: Letting them know what they are, why we produce them, why they taste a certain way and dispel whatever myths that have gained traction in the craft-brew world. Every year, we always bring in guest speakers. I can only say something a certain amount of times, but if I bring in someone else to say it, then it might resonate. They get to discuss their process and I learn a lot from them. There’s plenty of things that I learn from listening to the speakers. Walt Dickinson from Wicked Weed has been a big supporter and big proponent of our education, here. He shows up every year and gives a talk about his beer.”

“We haven’t released it yet, but Lauren Salazar from New Belgium is going to be our speaker! Lauren is, if not the finest blender in the entire world, she’s definitely in the Top Two. I’m really pumped to have her here. She’s the one who blends La Folie every year and runs the QC at New Belgium. She is a really incredible speaker who people will learn a lot from. We’ll have a few other guest speakers. People won’t have to hear me speak, that day. We open up our stage for our friends and put them on the spotlight.”

Please tell me more about the citizens program.
– “We launched our State of Funk program last year, where for $250, you were able to get eight single-barrel exclusive beers that will never be sold to the public. You already got your ticket to Funk Fest locked in — if you followed the instructions in the e-mail. Then, as a bonus, your first pint, every time you came into the taproom, was free. If you wanted to show up four days a week, then your first beer was free, every single time, throughout the entire year. I think we truly made the absolute most generous private beer club, that any brewery has ever done. I would invite someone to show me one more generous. That certainly made a lot of local people happy. We had a lot of out-of-state people join up, but most of them were local. It was a good way to give back and make the incentives more local-driven. It was a way to reward people who were supporting Yazoo a year before the ETF program even started, who were drinking Pale Ale, Sue and all the Yazoo flagship brands. It was a way to support those people, who supported us, from Day One. I hope they feel the same way at the end of the year, that they got a nice reward, it was well worth it and they will re-up for Year Two.”

Would you like to tease anything else for Funk Fest?
– “I guess the biggest teaser I have, at this point, is you have no idea what we have planned, from the time you walk in the gate ’til the time you leave, but I promise you’ll walk away amazed, this year, at some of the ideas we have. There will be the debut of a special collaboration beer, just for this festival.”

Will the collaborating brewery have a representative at the festival?
– “The collaborator will be at the event. Yes.”