Testing the Triangle: A Tantalizing Task at Skinwalker Ranch 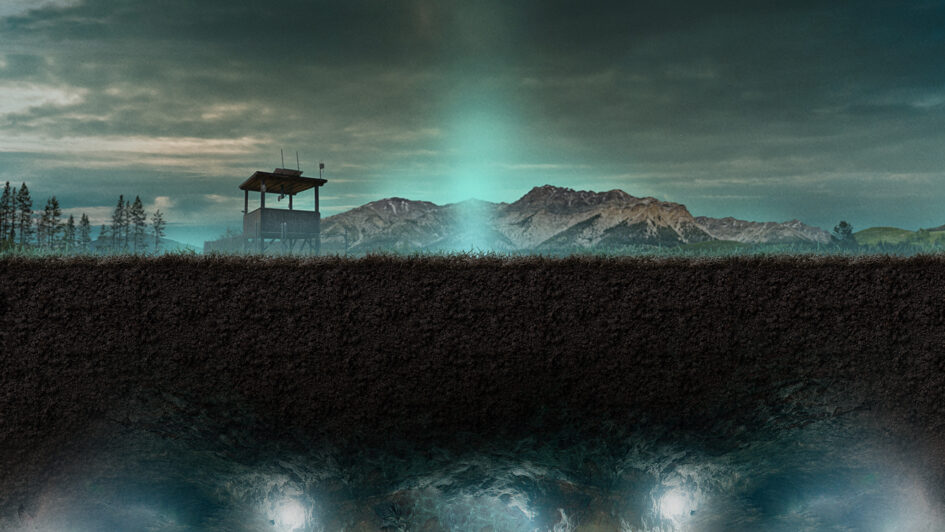 Per Matt
Ever had one of those days where everything goes wrong?

Where unusual, unexplained phenomena exist, and each scientifically sound theory used to gain more background information just doesn’t seem to work out, even though every law of nature found within our known world says it should? That’s what the team has dealt with on The Curse of Skinwalker Ranch every single day for three years, uncovering so many strange events, but never fully ascertaining any hard, scientific facts for their presence.

It could be a continual case of bad luck. Maybe it’s just reality TV with fancy editing. Or there could be an extra-planetary presence that’s to blame. Whichever way you look at it, Curse‘s third season really has me questioning what could be going on at the 512-acre property within the Uinta Basin.

Fans of the paranormal genre are well-versed in the property’s history. It’s been recounted endlessly on Ancient Aliens and other programs, so I look forward to seeing William Shatner take a Utah road trip in the very near future for his UnXplained TV show.

Every direction the team attempted to explore in Season 3 resulted in more questions than answers. They dug into the mesa — which was highly frowned upon by past inhabitants due to the unfortunate events that would usually follow — discovering unusually fused metal shards that are similar to those used to line NASA’s space shuttle. LIDAR scans showed an anomaly in the dig site and the driller believed something with an unusual dome shape lies underground. Could this be a buried spaceship?

Hoping to find some answers while poking the hornet’s nest, an unusual audio transmission was continually broadcast on 1.6 GHz during the aggressive experiments. The team visited a local radio station to rebroadcast the signal and in doing so, caused a bad reaction among the group. Could this be an extraterrestrial response to their activities?

The most perplexing location on the property might be a spot known as “The Triangle.” Each season, as the team’s experiments get bigger and more complex, something different is revealed whenever focusing on this spot. Some GPS trackers dropped out of an airplane revealed they bounced off an object 5,000 feet above the ranch, while others showed to have landed hundreds of feet below the ground there. Now, that’s weird.

Radiation spikes have also been detected at the mile-high area above The Triangle known as the “anomalous zone.” So, yet another obstacle to decipher what’s actually going on at Skinwalker Ranch. The truth is out there.

In previous seasons, the team’s launched multiple rocket systems into the heart of The Triangle, resulting somewhere between technical difficulties with no hard data to hard-to-believe evidence that doesn’t quite pass the eye test. This year, three rockets were brought in (one standing at 15-feet tall), using the most complex, biggest data-collecting payload, yet. Not surprisingly, it was also the most expensive science experiment ever attempted by the team.

The first one had catastrophic failure, blowing up on the launchpad before taking off. The nine-foot backup rocket was abnormally deflected midair by something unknown, almost immediately drawing Unidentified Aerial Phenomena into the nearby sky, which immediately disappeared. Upon multiple viewings by surveillance cameras, one question (of many) pondered the possibility that we witnessed an actual portal opening up. Talk about ending the season on a high note.

“If nothing unusual happens… that will be unusual.”

As the team recapped the past year, specific incidents piqued my curiosity, including a translucent UAP seen in conjunction with a massive tremor, an intentional government coverup hiding a once-large cavern entrance (What was in there?) and a 3D model of the ranch that was taken via aerial drone, showing anomalies that might have been defined by on-premises petroglyphs and reaffirmed by a retired Navajo ranger. But I’m most interested in the Homestead Two mystery. It seems to be the paranormal heart that drives all of the strange things on the property. Why it did not receive more attention this past year is beyond me.

I’m really digging what this show is bringing to a large audience. There’s reality TV, then there’s science fact. The Secret of Skinwalker Ranch brings the best elements of both categories together. I cannot wait for the next major discovery to be documented there.