The Meg: Jaws vs. The Transporter

Jason Statham (The Transporter) seems to be joining a cast almost as diverse as The Fast and The Furious to go up against a megalodon shark. He’s part of an aquatic research crew — which includes Cliff Curtis (Sunshine, Whale Rider, and Fear the Walking Dead), Winston Chao (Skiptrace), Li Bingbing (Transformers: Age of Extinction, Resident Evil: Retribution) and Ruby Rose (John Wick: Chapter 2) — that encounters this prehistoric predator while probing the deepest parts of the ocean in the Mariana Trench.

I really like the image of the teeth-marks on the glass that we see in the trailer. It gives us a good idea of the size of this shark’s maw. The dark water around the submerged facility is also enough to give us chills, being this many leagues under the sea. The special effects actually look pretty decent (which is rare in a shark movie); the shots of the sea bed and the depiction of that life would make James Cameron proud.

I also think that the scene with the giant squid is pretty neat. Watching the enormous tentacles wrap around the tiny submersible would probably make for a real nail-biting scene. It’s almost too bad that the trailer shows how Li Bingbing’s character gets outta it. I haven’t seen a giant squid attack that cool since The Kraken attacks the ships in Pirates of the Caribbean: Dead Man’s Chest, whose scenes are among the most awe-inspiring of the franchise.

Speaking of awesome, I think many of us fans of Critical Role are excited at the prospect of a kraken being the patron to a warlock in the new campaign. The former sailor Fjord, played by Travis Willingham, seems to have made a pact with a creature of the deep. His dreams set in the ocean are narrated as facing the giant yellow eye of his colossal patron.

Who knows what else lives in the ocean’s depths? We do know that giant squids still exist. Thanks to NPR articles like The Kraken is Real, we know that the largest squid on record was 55 feet and there’s at least one alive that’s 30 feet long, thanks to the video shot by ocean researcher Edie Widder and her team. I remember listening to her interview on the radio, explaining how they were able to capture the footage and that most other researchers use methods that are too noisy or use too much light and frighten away such creatures before they can be filmed. It looks like the film, The Meg, takes this concept one step further. And you know what? Considering that Edie Widder says that only 5 percent of the ocean has been explored, I can totally believe that something big might be lurking down there.

But The Meg isn’t the first horror movie to feature a giant shark. It isn’t even the first to feature a megalodon. But it’ll probably be one of the few that won’t look like garbage. Movies like Super Shark, Jurassic Shark, Megalodon and Shark Attack 3: Megalodon all have special effects that are a particular brand of awful (especially that last one). And if you wanna see a megalodon fight other creatures, a la Godzilla, there’s the Mega Shark Versus series with more giant monsters than you can shake a stick at (Giant Octopus, Crocosaurus, etc.). These are the kind of movies you’d expect to find on the SyFy channel and I’m not even including regular-sized shark movies with horrible special effects — I’m looking at you, Shark Night. In spite of a good concept, you had forgettable characters, a PG-13 rating instead of R and had bad CGI.

Special effects aside, you could probably name the number of good shark movies out there on one hand. Some people might include Open Water or The Reef. A solid, more recent inclusion would be The Shallows. As someone who used to go surfing with my friends, I found the concept terrifying, which makes for a good scary movie. I remember the image of the shark’s shadow in the wave behind the surfer and the shot in the first trailer of the shark circling the small rock on which Blake Lively’s character is stranded upon in The Shallows.

I might have included 47 Meters Down for its frightening premise and star Mandy Moore, but I felt like the twist ending was a slap in the face. The fact that it invalidated the most harrowing sequence in the movie is indefensible for me. I also don’t know how they’re actually planning on releasing a sequel: 48 Meters Down. Speaking of a movie that got an unnecessary sequel, Deep Blue Sea 2 came out recently. Personally, I do like the original Deep Blue Sea. It had an original premise, a chilling soundtrack (although there’s one shark movie out there with a more memorable score), a good budget and a great cast. I’ve watched it many times over the years and only recently realized that Thomas Jane (The Punisher) treats a lot of the scenes and set-pieces like a Slip ‘N Slide. If you don’t believe me, give it another watch and pay attention to the scene where the laboratory floods or when the group goes past the door that’s bursting bolts in the water-filled corridor. Regardless, the movie is still a good one.

But the granddaddy shark movie of ’em all has an even more memorable set of characters: Quint, Hooper and Sheriff Brody. Memorable, not only because they are played by great actors, but because I can remember the names of their characters without checking Wikipedia or IMDB. In addition to establishing the summer blockbuster, Jaws still stands tall as the king of the shark movie subgenre. I had a manager at Blockbuster Video who used to recommend Jaws to customers, no matter what they were looking for, because he liked the movie so much. True story. Although that manager would disagree, I’d even list Jaws 2 as one of the better shark movies out there (but not the other sequels). Considering the first Jaws was released back in 1975, that’s pretty impressive. The Meg shares one other aspect with Steven Spielberg’s classic: both are based on books. The novel, Jaws, was written by Peter Benchley in 1974; while Meg: A Novel of Deep Terror was written by Steven Alten and published in 1997. Alten’s novel spawned some sequels and I bet the movie hopes to do the same, just like the Jaws movies.

Speaking of Jaws, remember how the film opens? Well, I helped bring about a similar encounter recently in the comic book pages of Cavewoman: Deep Water after chatting with publisher Kevin Alsop… only this time the skinny dipper is a super-strong heroine with a Bowie knife. 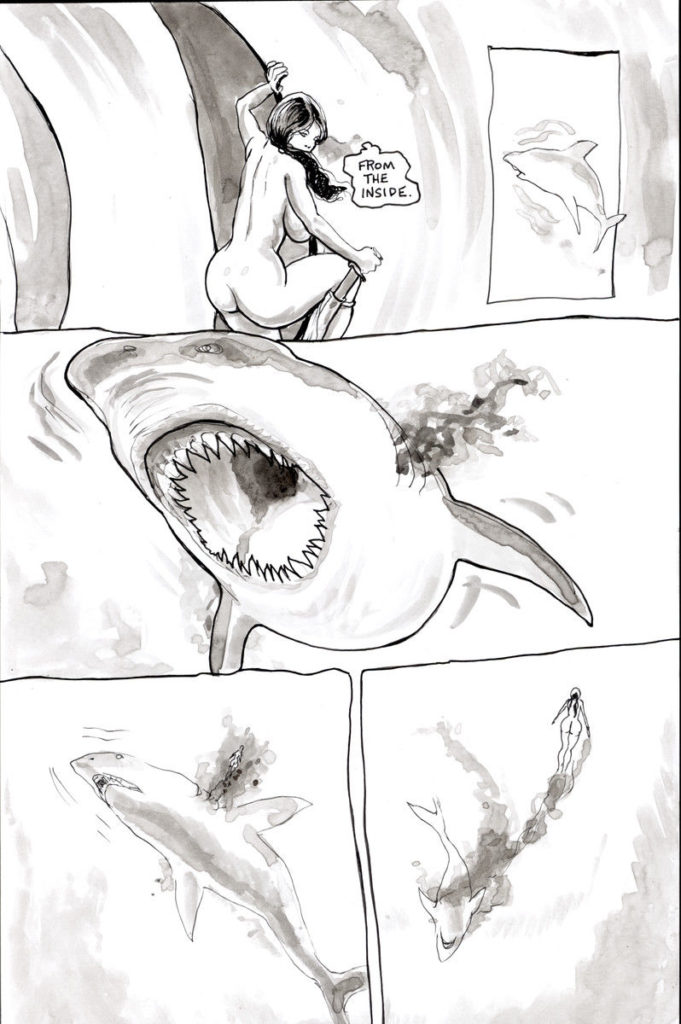 I actually can’t take too much credit for the six-page sequence or the clever way that Cavewoman (Meriem Cooper) dispatches the beast. Kevin had told me in advance that Meriem was going to be fighting an aquatic villain in an upcoming issue. Since I’d never seen artist/writer Devon Massey draw a megalodon shark, I lobbied for its inclusion (in addition to the main villain), considering the prehistoric time period and the ocean setting. There was enough time before publication to make it happen and it made for a thrilling sequence.

Kevin also had something to say about the trailer for The Meg: “Can’t go wrong with a shark movie or Jason Statham!”

We’ll find out on August 10th, when The Meg is released in theaters.