The Similarities of Pro Wrestling and Movies Are Many

Besides being an uber horror movie fan, I am a professional wrestling mark. From an early age, I have been enamored with the storytelling the business offers. The writers and producers who work behind the scenes come up with stories that span weeks or months, having the actors/wrestlers go out each night and tell their own special stories.

Pro wrestling is much like an anthology movie that has no end. Wrestlers have their own small parts of each show that work together to tell an overall epic. When the writers and wrestlers work well together, magic happens. But if they are not on the same page, it is a total failure that destroys the illusion of reality.

I started watching wrestling in 1984, not long after Hulk Hogan defeated the Iron Sheik to become the WWF Heavyweight Champion. I had watched a little wrestling on Saturday afternoons. However, I wasn’t into it. Just had not caught my attention, yet.

Then, one day I was at the Scholastic book fair at my elementary school. And like many kids, I had money and wanted to spend it, regardless if I knew what I was buying or not. One of the books I got was a small blue book with Hulk Hogan on the cover. I probably thought it was a comic-inspired book, since I did know about The Incredible Hulk. But this story was how Hogan was able to defeat the evil Sheik and win the title. I could barely read, but this book was easy, and I loved it.

Soon, I started trying to find where I could see Hulk Hogan and the rest of the WWF wrestlers. And I was finally able to, right around the time that a new cartoon series called Hulk Hogan’s Rock ‘n’ Wrestling started airing. That is really all it took. It started with a book, and then I became a true Hulkamaniac.

The characters in wrestling were so over the top, they seemed like characters from cartoons. The only difference was these characters were real. They showed pain. They got tired. They bled… a lot. In those days, blood spurting from the heads of the likes of Jerry “The King” Lawler, The Nature Boy Ric Flair, “Dirty” Dutch Mantell and others were commonplace. To kids like me, it looked real, felt real and was real. Real superheroes and villains come to life on my TV every single week. And if you were really lucky, you could even go see them live at the fairgrounds or an arena nearby.

While not exactly bad, WWE has many problems in this day and age. Their flagship show, Raw, has had several issues with the quality of the stories being told. Many of the mid-card acts (guys who are not exactly the leaders of the show, but not unknown by regular viewers) are scripted into bad storylines, where it seems like the plots are lost. Many times, these arcs are rushed and end for no reason, whatsoever. And truly great acts are dropped for “budgetary reasons,” even though the company is showing record profits (Yes, I am still upset about the loss of Bray Wyatt).

Many attribute these failures to the CEO of WWE, Vince McMahon. Being that he is now close to 80 years old, the belief is that Vince has lost his way, and is not in touch with the fan base. Many wrestlers and writers currently employed feel powerless to say anything for fear of being fired, and just let the bad stories continue. 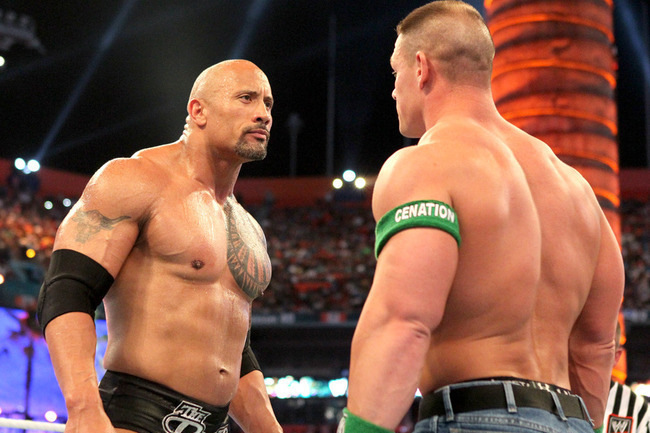 The Rock vs John Cena

Before 2018, there were not many options for wrestlers to stay in the light of the general public, once they left WWE. But since then, All Elite Wrestling (AEW) has become a major player in the business. Many frustrated and underappreciated wrestlers now flock to this company, which in itself was started by independent and former WWE stars. Many are given the ability to in effect pen their own stories with limited editing, allowing these creative minds to carry along stories that feel more natural and far less scripted. Fans have taken notice as well, seeing some intriguing and good matches along with new and inventive stories. Is AEW perfect? No. But it is something to work with.

Another wrestling association that has cut into WWE’s business is Impact Wrestling. This Nashville-based company has actually been around for a while, and at one time was the second-largest show in the U.S. under the name TNA Wrestling. Now restructured, the operations are way smaller than WWE and smaller than AEW, but it still puts on a weekly show on AXS TV and YouTube.

I had a chance to go to a couple of tapings for Impact recently, and I like where they are going. They recently put in a working relationship with AEW and New Japan (the largest organization in Japan), so they do talent trades from time to time. This sets them apart from WWE, which requires strict “no compete” rules with their talent. While the stories are not as engaging as AEW, they are still much better than some of the stuff WWE has been pushing out, as of late. Here’s to hoping they continue on this rebuilding track and become a major force in the world of pro wrestling once again.

Pro wrestling is so much like movies: It’s easy to see why many wrestlers have made the leap to Hollywood. Wrestlers know how to be believable in made-up stories. They know how to adlib if the scene calls for it. They know how to do some stunts safely. And, many have the good looks and physique that just scream “put me in your movie.”

No, not every wrestler would be great in Hollywood, but they have the building blocks to become stars. And maybe that is why wrestling is right up there with my love of film.

So, what are you waiting for? Watch wrestling!