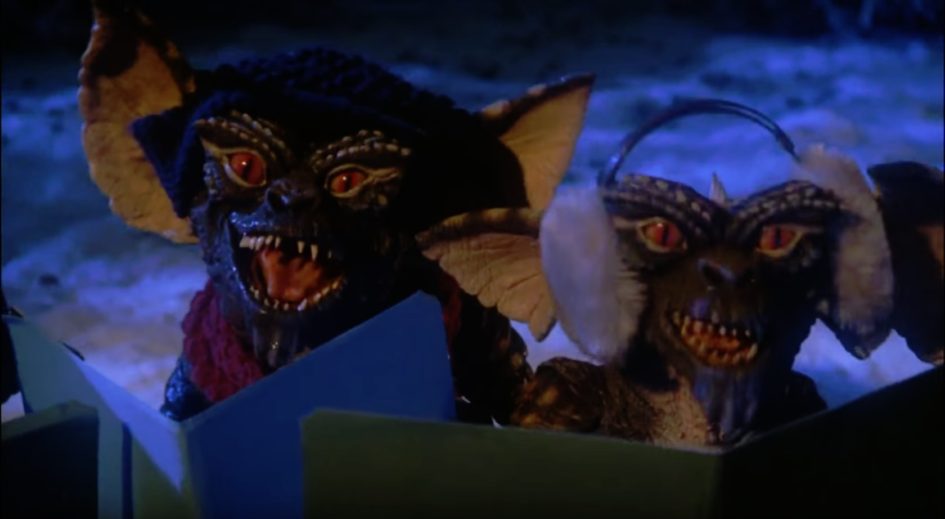 Die Hard, Lethal Weapon and Gremlins are three movies that immediately come to mind when I think of movies that take place during Christmastime, but are not Christmas movies. So, what are some Christmas-adjacent movies you could watch this December?

I put this question to a bunch of my friends and got a whole lot of great recommendations. Sometimes, instead of a visit from Santa, you want a small town to be visited by a bunch of little green gremlins. While it it can be heartwarming to watch a bad person like Scrooge learn the true meaning of Christmas, it’s even more fun to watch a bad guy like Hans Gruber learn what it means to mess with the one-man army that is John McClane.

Just watching that trailer makes me wanna see this classic again. I really like Die Hard 2 as well, but there’s also a surprising number of other great action movies that take place around Christmas: First Blood (Rambo), Rocky IV, Ronin, Enemy of the State and Iron Man 3 (which I’ll get to it in a minute).

I didn’t immediately think of some of the movies my friends mentioned to me, because they’re the sorta movies where you watch once and that’s it. Reindeer Games and The Long Kiss Goodnight are prime examples. Another spy flick would be Three Days of the Condor with Robert Redford — I haven’t seen that one in awhile. End of Days with Arnold Schwarzenegger would be another, although that one’s an action/horror movie. Invasion U.S.A. with Chuck Norris is one I haven’t seen, but was mentioned.

L.A. Confidential is one that starts out around Christmastime. It’s a film you should watch at least once and it has a good noir element, as well as great performances by a lot of fantastic actors, featuring Guy Pearce and Russell Crowe in the leads.

Speaking of Russell Crowe, I’d also like to recommend The Nice Guys. This neo-noir action comedy has him playing opposite Ryan Gosling and is surprisingly good.

Shane Black, who wrote the aforementioned Lethal Weapon and The Long Kiss Goodnight, wrote and directed The Nice Guys. This guy is notorious for setting his movies around Christmastime and they are often set in California. Having a time of year already picked out must make things easier and background decorations are already picked out. Having the films take place on the west coast means that the Christmas decorations won’t look outta place on a dry day. Although, for Shane Black’s Iron Man 3, he got the best of both worlds: Tony Stark starts in California, then ends up in Tennessee for a bit, where there’s snow.

But if there’s one Shane Black movie starring Robert Downey Jr. that I would highly encourage you to see, it would be Kiss Kiss, Bang Bang. Another neo-noir film with an even better mystery, RDJ plays off Val Kilmer’s character so well that I wish there’d be a sequel.

Now, Robert Downey Jr. may have starred in the latest superhero sequel to take place during Christmas, but it wasn’t the first. I’d like to take us back, back to a time before Val Kilmer played Batman, back to 1992 when Michael Keaton was Batman and Tim Burton directed Batman Returns.

While Tim Burton’s 1989 Batman is one of the greatest superhero movies of all time and might even edge out The Dark Knight for best Batman film — depending on who you ask (I’d say it does) — its sequel is not always held in such high regard. It’s weird and dark when watched when you’re young, but it grows on you as you get older. You can also return to this installment after you’ve come to appreciate Tim Burton’s films and embrace their weirdness.

Additionally, Batman Returns is one of the first superhero films (and also one of the few) to juggle multiple villains successfully. It also still has THE quintessential portrayal of Catwoman found in any media. For better or worse, it’s been the go-to for other creators. The 2004 Catwoman movie was initially supposed to be a spin-off of Batman Returns, with Michelle Pfeiffer reprising her role. That didn’t happen, but it appears the creators looked more to the Catwoman in Batman Returns than to the comic books (much to my chagrin). Halle Berry’s character was revived in much the same way Pfeiffer’s character was. A photograph of Pfeiffer’s character can also be seen in the 2004 movie.

The short-lived Birds of Prey TV show constantly used a flashback of Batman and Catwoman in the style of Batman Returns and their flashbacks of Selina Kyle looked more like Pfeiffer’s character — complete with blonde hair (Selina Kyle has dark hair in the comics). Batman: The Animated Series borrowed heavily from Burton’s films, and while their Selina Kyle was also blonde, her character wasn’t exactly the same as Pfeiffer’s, although her interactions with Batman were similar. Judging by the look of Catwoman’s current costume in comics, when the series was re-launched this year, I’d hazard a guess that artist Joëlle Jones is a fan of Pfeiffer’s version of the outfit.

However, my favorite moments between Bruce and Selina occur outside of costume. In particular, their conversation on the couch before the lighting of the Christmas tree and their conversation during the New Year’s Eve dance. The former is so layered, I love it. The latter still tugs at my heartstrings and is a moment that can only be appreciated when you watch the movie when you’re older.

At the end of my previous article here, I’d mentioned that The Nightmare Before Christmas could be watched anytime between Halloween and Christmas. I find myself watching that movie about every year around this time. It’s just that good.

A last-minute recommendation that came up in discussion, which is appropriate for this blog and this site, is the 1984 Zombie cult-film Night of the Comet.

Some older black-and-white films — Casablanca, The Apartment and The Thin Man — also take place at Christmastime.

There are plenty of dramas and similar genres that are Christmas-adjacent. Some I’ve seen: The Royal Tenenbaums, In Bruges, Eyes Wide Shut, Go and You’ve Got Mail; some I haven’t: The Lion in Winter, Tangerine, Sleepless in Seattle, About a Boy and Moonstruck.

But I’m far more familiar with the comedy genre. At the top of that Christmas-adjacent list is a movie that you also probably find yourself watching every year around that time. It’s a movie that many of us have grown up with and has become a classic…

Much like when I watch Die Hard, I also usually find myself watching the sequel right after I’ve re-watched the original — which also takes place at Christmas.

Sequels are great because we don’t have to be re-introduced to the character or premise and the fun can start sooner. If we get to keep the same great actors and a strong cast is back, all the better. The supporting characters in Home Alone and 2 are also outstanding. The first film had a wonderful and lovable appearance by John Candy. On the flip-side, I love Tim Curry’s character in the second film — when he smiles like the Grinch, it’s the best. A young Rob Schneider is pretty great too and probably had kids giving gum as a tip to bellhops for the next decade. All the shenanigans at the hotel are fantastic (and you kind of commiserate with the hotel staff when you’re older and you watch Home Alone 2), but the icing on the cake is when Kevin puts the Wet Bandits through the ringer. Just like in Home Alone, the movie’s payoff is watching the punishment doled out to poor Harry and Marv.

One scene that never fails to make me laugh is when Marv gets electrocuted. It’s horrible, I know. I shouldn’t laugh, I know what’s coming, but I do.

That skeleton is too much, it’s so cartoony. It cracks me up every time. God bless Joe Pesci and Daniel Stern for returning to this sequel.

I would be remiss if I didn’t mention Grumpy Old Men (1993). Jack Lemmon and Walter Matthau are another odd couple that play well off each other. An even older comedy with a pair of younger comedians (Dan Aykroyd and Eddie Murphy) is Trading Places (1983). My friends also mentioned: The Ref, Friday After Next and Trapped in Paradise. I wasn’t sure whether to include Jingle All the Way, but I will mention Love Actually as it’s a great movie to watch in mixed company or with your significant other.

Some significant movies set a scene at Christmas and then carry right on. Toy Story, Ghostbusters, The Godfather and Full Metal Jacket come to mind. Although many of my friends working retail, hearing Christmas carols played day after day, probably feel like the Addams Family at the beginning of their film.

Remember, you don’t have to watch a Christmas movie to watch a movie taking place during Christmastime. Just refer to the Christmas-adjacent movies listed here for some gems and enjoy.