What’s Next for Marvel’s Agent Carter?

Now that the dust has settled and the fallout of ABC cancelling Agent Carter has lessened, to a degree, what’s next for Agent Carter?

Back in May when the news first broke, we made a Plea to Netflix for rescuing the TV show. Since then, there’s been a few developments coming from some of the TV show’s influential filmmakers.

For Season 2, Agent Carter performed as a gap-filler series, airing between new episodes of Marvel’s Agents of S.H.I.E.L.D. with its 10-episode order wrapping with a cliffhanger ending. Ratings had dipped from Season 1 for Agent Carter and rumors were constantly swirling that Adrianne Palicki and Nick Blood’s popular characters Mockingbird and Lance Hunter would be written out of Agents of S.H.I.E.L.D. as a back-door spin-off to star in Marvel’s Most Wanted, which seemingly would have replaced Agent Carter. In a shock to everyone involved, at the last minute, the ABC network bailed on both projects. But was the wrong show cancelled?

Marvel TV boss Jeph Loeb recently discussed the cancellation of Agent Carter, which caught him off guard, since he was not consulted before the TV show received the axe. Two of the show’s main characters have been hardly sitting still, each moving on to headline a new TV series. Dominic Cooper (Howard Stark) stars as the lead character in AMC’s Preacher, but is interested and willing to return to Agent Carter, should the opportunity arise. Hayley Atwell has been cast in the new ABC police procedural, Conviction, but she’s also open to splitting her already busy schedule, should Agent Carter get renewed. Loeb would also be interested in possibly bringing back the popular characters, in one form or another. If a new home for Season 3 of Agent Carter isn’t possible, he’d be up for featuring the main characters in some sort of a TV movie/miniseries/special, which Atwell has suggested she’d be interested in, as well.

So, why hasn’t Netflix pounced on the opportunity to bring Agent Carter into the Marvel Cinematic Universe fold that already exists at the streamer?

Netflix Chief Content Officer Ted Sarandos revealed there may not be any room for yet another Marvel TV series, with production already under way for Daredevil, Jessica Jones, Luke Cage, Iron Fist and The Defenders, along with The Punisher spin-off already planned. And since Netflix only releases two Marvel TV shows a year, that’s already a rather full schedule. 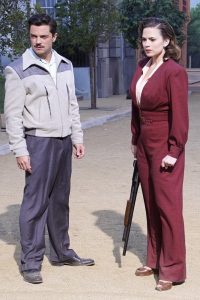 For a TV series that featured great characters, not to mention strong female leads within the MCU invading the all-boys superhero club, their presence will be deeply missed. Peggy Carter was an independent, strong woman, who was a good role model for children, spitting into the face of yesteryear’s sexism, while being one of the few female superheroes of the Marvel Cinematic Universe. James D’Arcy was the original (and best) Jarvis of the MCU, whose great deadpan delivery and dry humor often helped Peggy save the day on her many adventures, along with serving as Stark’s butler. Howard Stark (played by Dominic Cooper) was an innovative genius who often found himself getting into troubling situations, usually getting saved by Carter. Dottie Underwood was a great foil for Peggy, who often physically overpowered as a villain, but got outsmarted from time to time, coming from the Soviet Black Widow program that needs to be further explored in future movies or TV series.

Season 2 of Agent Carter explored new discoveries (including Zero Matter), actually developed quite a few of the secondary SSR characters, displayed lots of corruption within the good guys, featured a little too much of an unnecessary love triangle (which may have killed off the show), included an open-ended cliffhanger ending, finally introduced Ana Jarvis and made no mention of Dottie’s final whereabouts (Did she actually pull the trigger?).

Agent Carter, as a series, attempted to explore more of the groundwork of the modern-day Marvel Cinematic Universe. Originally, I thought the premise of the TV show was to show the formation of S.H.I.E.L.D. but that still hasn’t happened directly (but was beginning to happen in a round-about way) and to tie into the blockbuster Marvel films, as well as S.H.I.E.L.D. via connected back stories. Season 2 had far fewer cameos of cross-over big-screen characters, as well as connected origin-story plots. This was a big drawback, as compared to Season 1.

What is the future of the show? Briefly, an aged Peggy Carter was featured in the introduction to Ant-Man alongside Howard Stark and Dr. Hank Pym. These already-established characters deserve some great storylines together, whether they’re featured on the big screen, as a TV movie, as a TV miniseries or as a One Shot extra. We’ve been pining for a Carter-Pym team up ever since the end of Agent Carter’s Season 1. In fact, we were hoping Season 2 would connect the TV show to the Ant-Man movie, showcasing team-up adventures through different decades (as seasons) that ultimately lead the two characters to create S.H.I.E.L.D. And why not feature a storyline that teams up Peggy Carter with Nick Fury and The Howling Commandos? These are the movies we would pay to see multiple times!

Peggy’s character briefly made an appearance in Captain America: Civil War, as her death deeply moved Steve Rogers. Her obituary was quickly shown in an episode of S.H.I.E.L.D. connecting that TV series to Marvel’s big-screen adventures. 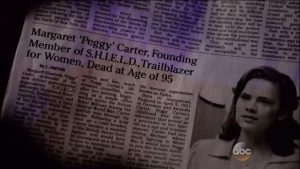