Catching up with Agents of S.H.I.E.L.D. Season 3 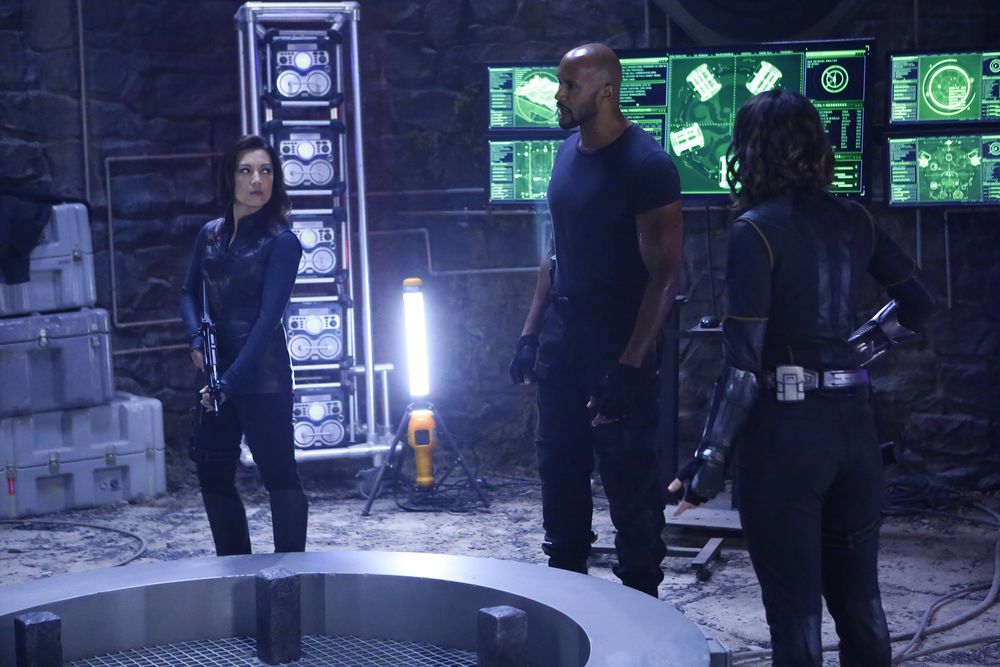 Season 3 of Marvel’s Agents of S.H.I.E.L.D. has brought new challenges for the spy organization. Picking up where the series left off last year, the Terrigen mist that dissolved in the ocean and was distributed throughout the world via fish oil supplements has created an outbreak of newly formed Inhumans. President Ellis creates the Advanced Threat Containment Unit, which frequently clashes with S.H.I.E.L.D. and the secrets of the Kree Monolith are slowly revealed.

Better late than never, after binging eight episodes, we’ve finally reviewed the first half of the season. It’s been great season so far, much better than the previous two seasons’ beginnings. Plenty of questions are answered with even more questions and where, exactly, is planet Maveth Here is our summary of the season, so far:

Purpose in the Machine
Back in 1839, the monolith was an unknown, much as it is today. After beating some sense into it, Fitz realizes the monolith is actually a portal to another planet. With an assist by an Asgardian, Coulson gets a monolith mentor, Ward attempts to piece HYDRA back together by force and May has unfinished business, but wants a normal life away from S.H.I.E.L.D.

Daisy discovers she can open the portal by herself, Fitz jumps into it, returning with Simmons, but the monolith is destroyed. Mack gives Daisy the nickname Tremors, as if she needed yet another nickname.

A Wanted (Inhu)man
As the ATCU hunts down Lincoln, Mack and Daisy attempt to protect him. Simmons readjusts to “normal” life, Hunter and May join a fight club, Coulson sets up a meet and greet with Rosalind Price, Bobbi gives Fitz some relationship advice and alien-threat APBs are making the general public paranoid. A change of plans almost results in yet another war between agencies. A secret kiss, video game teammates and a longing to return through the portal wraps up this decent episode.

Devils You Know
An Inhuman recruiting mission goes awry, Rosalind is really annoying, Bobbi bugs Fitz and still hasn’t been cleared for active duty, Hunter moves up the ranks of Hydra, Simmons has lost all hope, May returns to duty, Lash turns in a transforming performance, Ward’s evil empire gets infiltrated and we’ve got a burning feeling Dr. Andrew Garner may have made his final appearance on the show.

4,722 Hours
This very special episode of Marvel’s Agents of S.H.I.E.L.D. focuses solely on Jemma Simmons and her journey through the portal to another planet via the Monolith. This planet is a barren wasteland, has very long nights, heavier gravity than Earth (at least that’s her excuse for constantly falling down) and there’s at least one creature lurking within a black lagoon. More shocking than killing (and eating) said creature: Jemma’s phone still has power after a month!

Simmons quickly learns she’s not alone and after escaping her captor, forms an uneasy alliance (sound familiar?). She discovers he’s a NASA astronaut who’s been stranded on Maveth for 14 years. An attempt to reach the next wormhole fails and the two fall in love. Jemma escapes, Will does not, but rescue plans are made. The planet’s moody sandstorm feels too similar to LOST’s smoke monster and the first part of the episode feels WAY too much like Tom Hanks’ Castaway, in a galaxy far, far away.

Among Us Hide…
This is Episode 50 in the series. It’s a nice milestone. Garner’s alive, but for how long? A Hydra goon is dispatched to finish the job. May unofficially recruits Bobbi, taking her off injured reserve. Hunter’s back to the bench, bugging Fitz in the lab. Mack’s got a theory about an ATCU spy, Werner von Strucker reunites with an old Hydra ally on Grand Cayman Island, a stealthy operation ends not so stealthily, Simmons offers advice, Grant accepts a shot at redemption, Rosalind believes she’s going to cure the Inhumans, Bobbi overcomes stage fright and Dr. Garner has a monster secret.

Chaos Theory
“Secrets can eat you up from the inside.”

May ponders a monster in the family, Fitz hopes to recover the data on Simmons’ phone, the S.H.I.E.L.D. training facility is revealed (Code Name: The Cocoon), Bobbi tries to address Hunter’s anger issues, Lincoln emerges from hiding with Lash’s secret identity, when confronted Andrew gets an itchy trigger finger and a budding romance between both agency’s directors is painfully obvious and hard to watch. Lincoln lashes out at Lash, who’s eventually caught and placed in stasis, hoping to slow his permanent transformation from human into Inhuman.

Many Heads, One Tale
While Andrew’s sedated, Ward’s request to loot the Hydra vault gets denied, Lincoln moves into the secret underground S.H.I.E.L.D. base, Mack questions Coulson’s relationship with Rosalind, Operation Spotlight begins to investigate the ATCU, Simmons discovers Will was a Monolith sacrifice, May forms an uneasy partnership with Linc, Fitz finally busts a move, Bobbi learns that the ATCU isn’t curing Inhumans but creating them, boomerang batons seem to suit Bobbi perfectly, Red Skull gets a shout out, Gideon gives a Hydra history lesson and Project Distant Star Return is uncovered.

Closure
Serving wine and burgers, Coulson’s quite the ladies man… until Roz gets shot in the neck. After her death, he interrogates the original team, hoping to find Ward’s weakness. Banks explains NASA’s involvement with the portal, Mack steps in as Acting Director while Coulson’s crew unofficially hunts for a head of Hydra, Giyera proves there’s a dangerous Inhuman working for Malick, Fitz and Simmons get kidnapped and tortured. Family ties run deep, Fitz gives up the world for his love, Mack sends the Inhumans on their first mission, Ward takes an unwilling guest through the portal, against all odds Coulson jumps into the situation headfirst.

Maveth
In the winter finale, the S.H.I.E.L.D. crew hopes to complete their mission. On another planet Ward leads a snark hunt, Acting-Director Mack plans to storm an ancient castle, Fitz locates Will, Coulson’s creepily longing for Rosalind, Jemma unleashes Lash onto unsuspecting Hydra troops, a former large population lived in nine cities on this mysterious planet and “Will” reveals his true intentions.

The unspeakable evil burns with rage (and death), Coulson gives Ward a hand finally putting him out of his misery, the good guys survive and are met with so many hugs and kisses. Remarkably, the big bad escaped… in Ward’s body. It seems to be a black-oil alien creature similar to that on The X-Files. To be continued…

Through 10 episodes, this year is definitely showing signs of true potential for the TV series. The best part of Season 3, so far, has been the inclusion of Powers Booth within the Hydra hierarchy. Gideon Malick’s complexity, as a member of the old guard, helps sell the concept that Hydra has been in existence for a very long time (even if its explanation is a retcon from the MCU films). Blair Underwood returns for a sizable role as one of the very few minorities portraying Inhumans, while R. Giyera is a promising new character. Having an Inhuman working for the bad guys is perfect, if only he lives long enough to make his time count. But why only one? Why aren’t there more Inhumans causing havoc for Hydra? Our current favorite character, Mack, gets more screen time, while painful references to our past favorite character, Jiaying, continue.

Alisha seems to pop in and out of episodes, as if she’s sometimes a part of Daisy’s special-operations team and other times totally forgotten by the show’s writers. She’s definitely not an every-day character yet, only making random sweeps appearances. With great power should come a great number of episode appearances. The best bad guys on this show are either killed off too soon (Jiaying) or indefinitely shelved (Mister Hyde). So far, Coulson has had a long string of bad luck. Every rival he eventually teams up with gets killed off the show (Robert Gonzales, Rosalind Price). On top of that, the repercussions of killing Ward will eventually be revealed and with that, Coulson will surely will enjoy lots of drama and internal conflict. The character of Ward is now dead, who is only a meatbag for the Big Bad, but what, exactly, is this character? Is the black oil creature an alien? An Inhuman? The Hive? Something else? For now, it’s a mystery, but the possibilities for the character to set into motion the events leading to Captain America: Civil War are the most likely scenario, later in the season.

Looking ahead, where is Agent Mike Peterson/Deathlok? Will the character simply be on the backburner until his super powers and abilities are needed to fight the next Boss Battle? The Secret Warriors team of Inhumans has been partially created, but will they ever get more screen time this year? What connection, if any, does Agents of S.H.I.E.L.D. have with the different ongoing Netflix series and the upcoming Marvel Cinematic Universe movies? There really hasn’t been many connections revealed throughout three seasons, even though they’ve been advertised as “It’s all connected.”

Late last year, rumors of a planned spin-off series were cancelled, in hopes of strengthening AoS. Periodically, those rumors returned this year and it’s now been confirmed that Hunter and Bobbi will soon be leaving supporting-character status on this TV show, while being featured in Marvel’s Most Wanted, beginning next year. How, exactly that impacts Agents of S.H.I.E.L.D. is yet to be determined, but their characters are definitely fan favorites and will leave gaping holes within the show’s mythology with their departure.

Strength: Hydra gets a cool new backstory and the rise of more Inhumans are shown.
Weakness: Killing off the show’s best antagonists and shelving other characters.
WTF Moment: When will there be an actual connection to the other MCU TV series and films?

Notable Quotes:
– “Change or die.”
– “You’re chasing rumors, ghosts.”
– “Do you really have a laser finger?”
– “If you can’t solve a problem, sleep on it.”
– “I have a real soft spot for that Golden Age.”
– “I need you to step up and do the damn job.”
– “This just went from bad, to really, really bad.”
– “This planet does not have rules. It has moods.”
– “Any sensible girl would swipe left in this moment.”
– “The world has gotten more complicated, hasn’t it?”
– “The octopus is one of the great symbols of Hydra…”
– “Death is the only thing returning through that portal.”
– “I pine for the days where we didn’t fight bloody aliens.”
– “Sometimes you gotta do a bad thing for the right reasons.”
– “The only spies without trust issues are either young or dead.”
– “I am impressed with this whole Furiosa vibe you’ve got going on.”
– “Be a shame to see this whole place blow up before we even move in.”
– “I assure you, that if you insist to take my agent in, you will start a war.”
– “Turns out, we’re standing in the middle of the world’s largest subwoofer.”