Mark Hamill Visits the Dark Side of Shadows 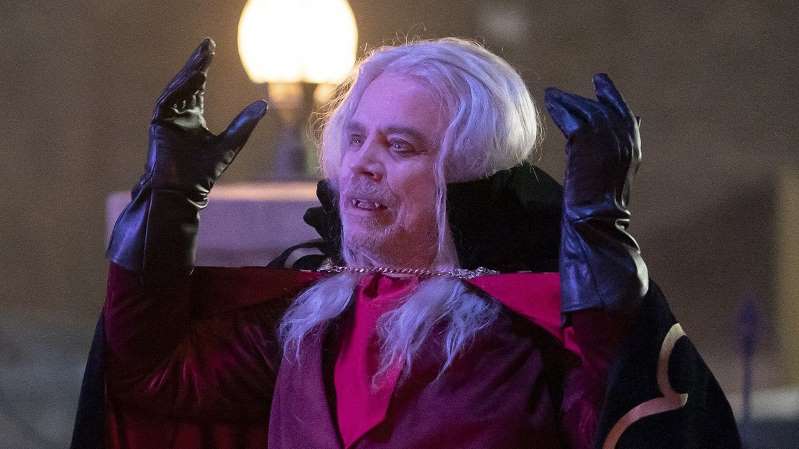 Mark Hamill journeys to the dark side as an undead rival On What We Do In the Shadows. © Russ Martin/FX

Per Matt
Luke Skywalker joins a new franchise? You want the impossible.

But yet, that is exactly what happened. Being a vocal fan of What We Do in the Shadows led to Mark Hamill’s brilliant guest starring role as Jim the Vampire, while visiting the dark side of immortality and becoming an rival to Laszlo Cravensworth in the brilliant Season 2 episode, “On the Run.”

Although he didn’t get to work with Taika Waititi (who was away, filming Jojo Rabbit), Hamill’s visit to the dark side of eternal life was balanced by Matt Berry’s character absolutely refusing to pay an overdue Airbnb bill during his previous visit to San Diego. By the time Cravensworth’s past finally caught up with him, he fled, fearing for his life (complete with a believable disguise: blue jeans and a toothpick). It was absolutely hilarious to watch the two actors chew their scenery. I truly wished the storyline could have been stretched to multiple episodes.

The show has been no stranger to inviting incredible guest stars (All-Star Vampires Unite for Small-Screen Shadows) and previously, this season’s guest star list included Haley Joel Osment (The Sixth Sense), Benedict Wong (Deadly Class) and Craig Robinson (The Office), through the first few episodes. And in the perfect-world scenario, Jim the Vampire’s story arc isn’t exactly finalized, as his return with even more vengeance is all but guaranteed. I cannot wait to see what happens next for these characters!

Regardless what you thought of the actor in the Child’s Play remake or the return of Luke Skywalker to the Star Wars sequel trilogy, seeing Mark Hamill’s return to the spotlight has been a long time coming. Growing up, Skywalker was an all-time favorite of mine and I went bonkers any time Hamill made a guest appearance on a variety of TV shows or movies. Remember those iconic Muppet Show episodes? I’ve practically memorized them!

Seeing Hamill assume an undead persona with a dark personality was definitely a fresh breath of air. I absolutely hope his character will return and bring more suffering to Laszlo. And if there just happens to be another episode hosting an incredible group of guest stars, can’t I hope for more former Star Wars actors to join him?

With the announcement of Taika taking a turn in the Star Wars Universe in the not-too-distant future, could there be yet another collaboration for the spirit ghost in a galaxy far, far away with my favorite filmmaker? If the show gets renewed for a third season (and why shouldn’t it?), there’s got to be a decent chance for Hamill to return for a guest-hosting spot… right?

Taika Waititi and Jemaine Clement really have created a darkly comic masterpiece for the small screen… which is, itself, adapted from their original big-screen concept. Hopefully, the chain of command at the FX Network will greenlight another season of hilarity. Maybe, even, Taika can share some screen-time with Hamill in an episode? A fan can always wish.