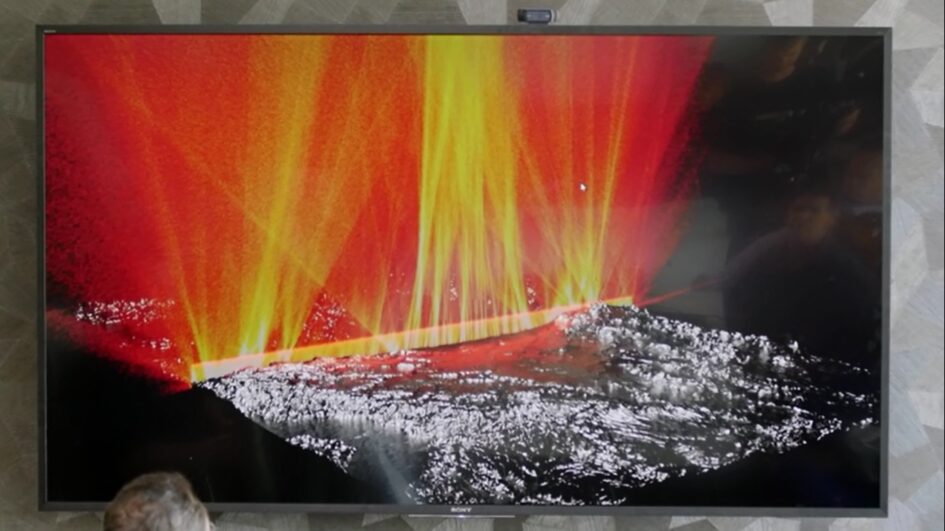 Microwaves beaming upward from underground or downward from an unknown location? Maybe both. Photo Credit: The Secret of Skinwalker Ranch.

Per Matt
Animal mutilations. Strange sicknesses. Bizarre lights. Black helicopters. Random radiation spikes (and the subsequent burns). A secret chamber full of unknown bones and unidentified flying objects. The Secret to Skinwalker Ranch attempts to expose the truth behind it all through a select team of scientists on a mission to discover indisputable, irrefutable evidence of the paranormal activity taking place throughout the 512-acre property.

Expect the unexpected while watching this reality TV show and you will not be disappointed. As the first season began, a fine line was drawn between the urban legends and the truth. Native American folk tales described a violent other-worldly creature, among other strange occurrences in the area and the previous property owner, Robert Bigelow, failed at finding answers for 20 years while conducting classified governmental tests. So, the new landowner, Brandon Fugal, sought to find answers for himself.

Unusual events continued as the team conducted a variety of science projects. Dangerous interference with unknown phenomena was discovered while malfunctioning equipment happened on a daily basis. Electromagnetic anomalies, animal attacks and unusual behavior were just a few of the incidents documented while the cameras were rolling. Is it possible that the team has opened up a can of worms in terms of what’s actually happening on the property? These are only a few questions that bounced around my head while watching the season finale, “Revelations.”

As a sort of group huddle, the team gathered to discuss their collection of data and analysis of the past few months on the property. Goals were made to validate, replicate and investigate in a more aggressive fashion, along with a proposed method to track unidentified flying objects, while possibly creating a means to communicate with them. News was broken that individual members of the intelligence community (and possible governmental agencies) were monitoring the group’s progress. Also in attendance was Utah Attorney General Sean Reyes, who personally endorsed the investigation. All together, this is incredible news for a second season of the program.

As a lifelong fan of paranormal and supernatural stories, Skinwalker Ranch offers no limits to unknown possibilities. The truth is definitely out there and I really want to see more of it uncovered from the redneck rocket scientist, himself, Astrophysicist Travis Taylor.

Theories abound about advanced technology, portals and the Uintah Basin acting like an antenna, either sending microwave frequencies upward from very deep underground or possibly receiving them from very high above, possibly outer space. NASA might actually get involved, and this really excites me. The more information uncovered, the better. But with discovery, hopefully there won’t be any hiding of credible evidence from the government.

With any good unsolved mystery, the hero never goes directly to his intended destination and the truth he seeks eventually gets peeled back, layer by layer, much like an onion. This seems to be happening on The Secret of Skinwalker Ranch. The journey is enjoyed while looking for answers. Many questions are asked and much more money will be spent before Travis and the team get there, but I’m definitely onboard for future scientific experiments and what they find.