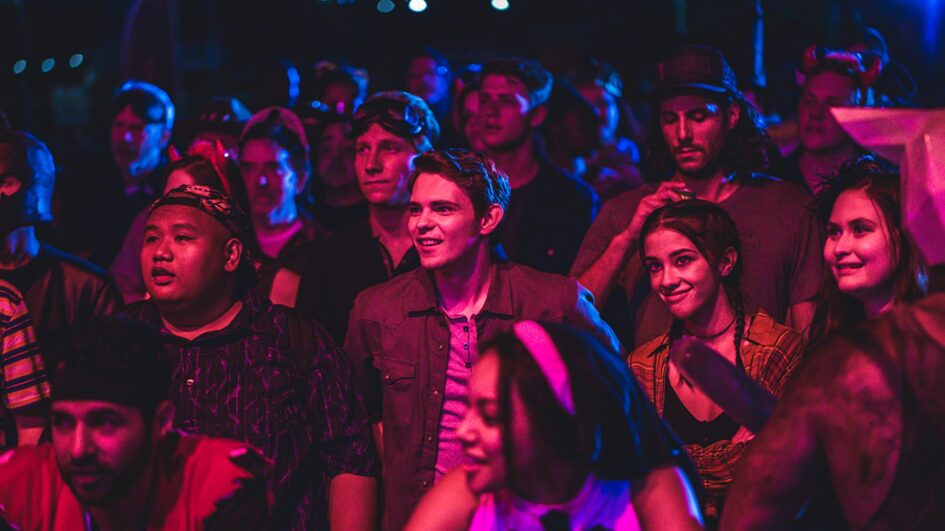 Blood Fest takes a meta look at convention culture as a horror comedy.

Are horror fans really afraid of the dark? More importantly, would they be able to accurately follow the rules of the genre in order to survive homicidal maniacs, vampires, killer clowns and Zombies on the prowl for blood? Fandoms, pop-culture convention life and the celebrity lifestyle all go under the knife, as each topic is dissected in the meta horror comedy, Blood Fest.

Produced by Rooster Teeth Productions and released in 2018, the movie answers the question: What would happen if the greatest horror event of all time actually became a bloodbath for its attendees? Would any of its fanboys and girls make it out alive? Apparently, there’s no horror without hope.

Blood Fest the film recreates some of the most iconic killer settings for fans to experience on a 700-acre ranch, as Blood Fest, the event, which is a pseudo haunted attraction, escape room and convention complete with celebrity panels, autographs and outrageous parties. Sounds right up my alley, actually. I would REALLY like to see a ramped-up, killer San Diego Comic-Con for scary movies following this theme.

There’s the clichés, stereotypes and horror tropes, but the storyline also addresses honesty and some real-life elements. A father opposes his son’s “obsession with violence” and disenfranchised actors (never meet your heroes) speak their peace as celebrity guests at a con that just happens to become a real-life movie…

“If movies were life, no one would buy a ticket.”

Blood Fest attempts to explore fear and desperation as people are motivated into fight-or-flight scenarios. Death is inevitable to many, so how will you make the most of the screen time that you’ve got? That’s not a bad theme. The film features some pretty good special effects, great cosplay costume ideas and some pretty funny one-liners.

“If this all goes down Evil Dead, I’m gonna pop.”

Early in the film, a pessimistic character declares, “Horror is dead.” On one hand, I wholeheartedly agree with him. Vampires are full of glitter, Zombies have become soap opera stars…  (PREACH!) and slashers have grown dull and old. Yep. Each of those elements have dragged down the genre as it has seeped into the mainstream.

But subgenres of horror have grown in recent years, as Get Out broke through at the Academy Awards, making Jordan Peele an Oscar-winning filmmaker with his first feature-film release. And Blumhouse has done an excellent job of filming on microbudgets, creating a killer selective sequel in an iconic franchise. I can’t wait to see how the studio brings the Universal monsters back to life!

“George Romero, if you’re out there… save us!”

I don’t think Writer-Director Owen Egerton attempted to “kill horror,” as one of his characters mentions. You can’t run away from death, but you can address it (in all its repugnant ghoulishness). I liked the story and it really spoke to multi-genre fandom and convention life, in general. As in real life, all the answers lie in the origin story…

We’ve been very big fans of the Halo Universe for quite a while and long ago, we interviewed Geoff Ramsey of Rooster Teeth. I really do hope there will be more movies like Blood Fest coming down the pike from them… possibly released via a streaming service?

Looking back at movies I may have missed in the past, it’s interesting to watch actors in previous projects like Seychelle Gabriel (don’t miss her recent revealing role on Get Shorty‘s Season 3 on EPIX) and Jacob Batalon (Spider-Man: Homecoming, Far From Home and the Avengers films), who both give good performances in Blood Fest.

I look forward to discovering more gems in future columns!

“There’s no need for re-animated corpses or blood-sucking clowns… all you need is a gun.”