Predator Gets a Prequel in Prey

I loved the original Predator film. While the sequels of the monster movie franchise did not really work for me, the original was the kind of action/horror film that I absolutely loved. You have this alien killing machine, complete with futuristic weapons, bent on tracking down and destroying its victims.

And then you had the military rescue team, headed by none other than Arnold Schwarzenegger. His team was an all-star lineup of muscleheads, including Carl Weathers and Jesse Ventura, sent on a mission to save some government officials. The fights were stupendous. The acting was… well… on par with what you would expect with an ’80s action movie. And you had Arnold spewing out oneliners, like, “If it bleeds, we can kill it,” and “Get to the Choppa!”

Predator was a true gem of a film.

But even with it being one of the best movies in the genre, Hollywood seems to have relegated the franchise to mediocrity. The sequels that directly tie into the 1987 film were mid at best, running toward unwatchable as the series continued. While there were some glimpses of hope, they were seemingly marred by bad stories, poor acting and a reliance on special effects.

I guess the thrills that the first movie revealed were only good in the context of that film. It’s almost as if the best of the creature was shown in the first installment, leaving no more room for growth. Even the off-shoot films in the Aliens vs. Predator Universe failed to capture my attention.

Now in 2022, director Dan Trachtenberg and writer Patrick Aison have teamed up to bring new life into the stale franchise with Prey, a prequel to the Predator franchise.

Taking place in 1719, we are introduced to Naru (Amber Midthunder), a young Comanche woman seeking her place within the tribe. Her brother, Taabe (Dakota Beavers), allows her to accompany a hunting team, made up of only men. Despite Naru believing she is a capable hunter, she is mocked and bullied by the others. But she soon finds that the prey they are hunting is a monster from another world.

The Predator (Dane DiLiegro) is here to test itself against the best this planet has to offer, and her tribe is squarely within its vision. 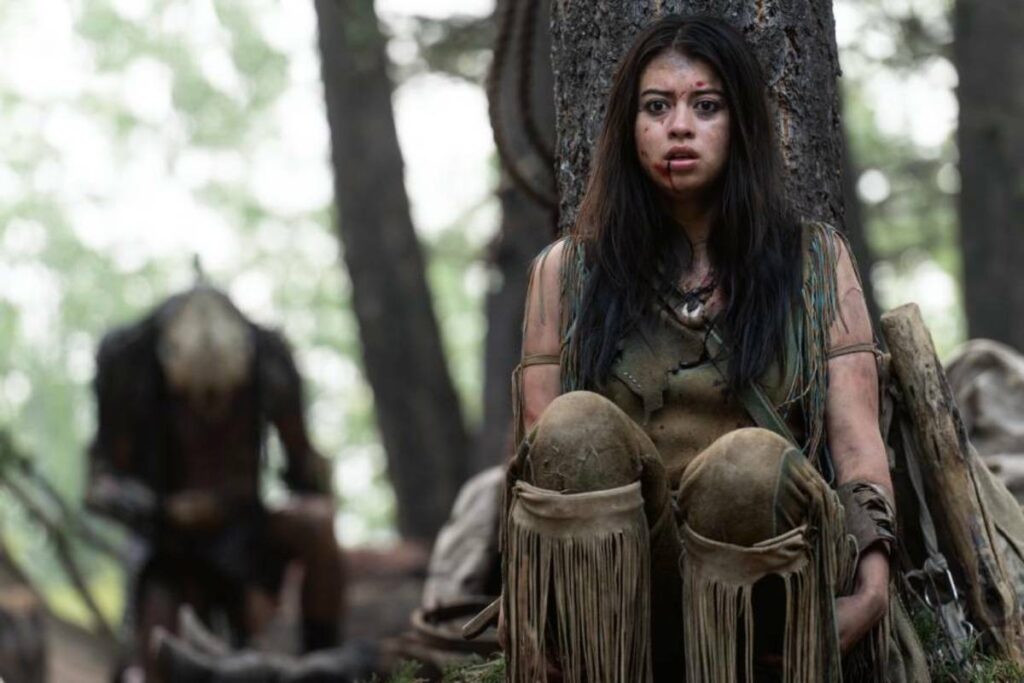 Prey is a very nice addition to a franchise in desperate need of a revival. Despite having a very slow start (the action really does not begin until 50 minutes into the 99-minute runtime), the movie explodes into non-stop action and suspense. Most of the slow speed is used for character development, giving us a glimpse into Naru’s struggles with stereotypes.

Yes, even in the 1700s, director Trachtenberg ensures we know that women are just as capable as men in hunting large beasts. While it was unrealistic to apply today’s social standards to history, it worked out in Prey. The slow burn gives us a chance to understand why Naru wants to break out of her role as cook/healer. Initially, she has pushback from the men of the tribe, and almost dies in her first hunting encounter. But by the time the third act hits, Naru is a competent fighter, using everything at her disposal to outwit the Predator. It’s an easy progression to watch, proving the saying, “practice makes perfect.”

The best part of Prey has to be the amazing cinematography. The world presented is one of natural beauty. It is hard to believe that there was a time when the planet looked pristine. The Comanche land is utterly beautiful. Jeff Cutter, the cinematographer, is an artist when it comes to his craft. He has worked on films such as 10 Cloverfield Lane, A Nightmare on Elm Street and There’s Someone Inside Your House. His skill has only improved over the years, making me excited to see what he will be doing in Wildflower and Distant, both releasing soon.

Prey is a great addition to the Predator franchise. It earns four out of five stars. The build-up to the third act is rather boring, even with the character development we get between Naru and Taabe. Still, the movie’s third act is back to the basics of action and murder. Prey starts as a newborn baby, ending with a bloodbath.

It is an excellent prequel, working in today’s societal norms seamlessly with the 1700s Comanche world. Check it out when it releases August 5th.