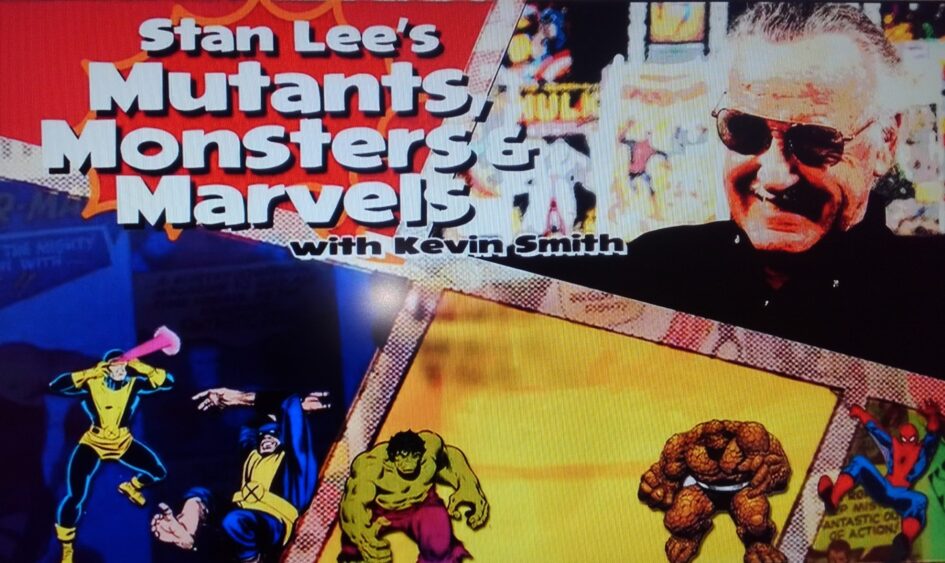 Lazy Sundays aren’t solely reserved for The Lonely Island. They’re the perfect time to clean out your DVR with programming you’ve really wanted to watch, but never actually made time for. So, while sipping on my Sunday morning coffee, I finally forced myself to watch Stan Lee’s Mutants, Monsters & Marvels. And I’m really glad I did.

Generally known as an ambassador of the entire comic book industry by fans everywhere, Stan Lee helped usher in the Silver Age with titans Steve Ditko and Jack Kirby, among others. In this documentary, filmmaker/fanboy Kevin Smith interviews the living legend to discuss his 60-plus years of writing comics and telling stories within the medium. This oral history is Stan’s origin story, as the father of mutants details an evolution of sorts in how comics ventured from the newsstand to becoming the multi-million-dollar industry it is today.

While it never truly feels like a celebrity interview performed by another celebrity, that’s what this is. Kevin Smith has long been a favorite indie filmmaker and for quite a while, Stan Lee was an independent writer before the medium exploded in popularity. In molding the mythology for Timely Comics, Stan’s instrumental influences were more a thing of necessity than intentional, bold decisions. He claims not to be “scientifically inclined,” but as a writer, he tried to create scenarios that sounded like they were fact based, even though he didn’t know much about a variety of topics involved in his characters’ origins. In creating the Marvel Method (a collaboration between the writers and artists) as the editor in chief, he was incredibly hands off, allowing himself time to focus on other aspects.

He was the first to introduce serialized storytelling and continuity, as well as posting credits into comics, giving each person involved a nickname and posting fan letters for the very first time. Lee really was a genius and someone who brought a positive change to the medium.

Broken down as two overall stories, “Creating Spider-Man” and “Here Come the Heroes,” Mutants feels like what you may hear Stan The Man say at the various comic conventions he’s attended throughout the years. Despite attending many of those throughout my life, I’ve never had the pleasure to meet him in person or to hear him speak in a panel, although I attempted to venture into his autograph line once (unfortunately, it was incredibly long and VERY expensive).

Many great behind-the-scenes stories are told. I won’t detail them all. He claims he doesn’t have the greatest memory, so it’s entirely possible he has revealed many of these in greater detail at different events, including his friendly rivalry with DC Comics, his favorite hero (Daredevil) and villain (Doctor Doom), dealing with the Comics Code Authority controversy, CBS changing Bruce Banner’s name to David Banner, creating The Merry Marvel Marching Society and bringing a backstory to the Silver Surfer’s philosophical ideas.

A quick highlight comes from touring Stan’s house, where a plethora of framed collectibles and memorabilia include some official and many unofficial items he’s picked up from time to time that turn the writer into an action figure, as well as art. It’s great to see the real-life superhero in just as much awe of Kevin Smith, as the comics legend is to the filmmaker. At one point, Lee even mentions he’d like to interview Smith in the same manner, which I’m guessing never actually happened before his death (but I would love to be proved wrong).

One of the segments ends with Stan laughing, “But, as I told you, I’m a big fan of me.”

What a jokester. What a character. What a guy. What a king of the cameo! He was definitely a pop-culture influencer, long before that was remotely possible. He even made one of us a better person! He will be sorely missed by all fanboys and fangirls everywhere.