Artemis: From the Book to the Movie

Sci-fi, smuggling and sabotage in a city on the moon! Set in the near future, the second novel by Andy Weir (The Martian) takes place in a lunar colony named Artemis. It follows a smuggler, Jazz (short for Jasmine), who takes a job and gets in way over her head. This book is gonna make for a great movie. I recommend you read it, so you can see what all the excitement is about from the same author who gave us The Martian.

While The Martian was like Robinson Crusoe or Cast Away on Mars, Artemis is like a heist movie on the moon. For me, my favorite moments were the two big capers: one in the middle of the book and one at the end. In fact, the lead-up to the end felt like an Ocean’s Eleven flick — assembling a team for an impossible job — which I found thrilling to read.

The beginning of Artemis starts out with a thrilling life-or-death situation, but after that, there’s a fair bit of world-building before the first caper. I encourage you to bare with the book as the payoff is… astronomical. It’s also important to get to know the characters and their skills before Jazz assembles her team in this unique setting.

Reading about a colony on the moon is certainly unique. Typically, when we see colonies in science fiction, they’ll on Mars, like in the movies: Total Recall or Ghosts of Mars. Other times, we’ll see people living in space, like on TV shows The Expanse or Star Trek — author Andy Weir said in an interview  that as a Star Trek fanboy, he watches Star Trek: Discovery and also The Orville. But when it comes to the moon, we typically see journeys to the moon and not its colonization. At best, we’ll get something like Sam Rockwell’s movie, Moon.

One exception I can think of are the episodes of Futurama, where the crew visits the moon. Similarly, the colony on Artemis does cater to tourists: tours of the lunar surface are available. You can visit the original Apollo landing sites, gaudy merchandise is sold, etc. But while Futurama also featured farmers on the lunar surface, the colony on Artemis deals in scientific studies, the harvesting of the moon’s minerals and the manufacturing of technical materials in low gravity.

Much like those Futurama episodes, chases in low gravity are where Artemis gets interesting. Take a movie like Run Lola Run or Salt (with Angelina Jolie), where the female protagonist is on the run… now give her the gift of one-sixth of the Earth’s gravity. She can run and ricochet off the wall of the colony like she was in The Matrix. When she flips a table over at someone, it hangs in midair and gives her a longer-lasting barrier so she can escape her pursuer. When she drops an item of important value, it doesn’t immediately smash to the floor, it falls slowly. Wouldn’t that look cool as a motion picture?!

Most of the third quarter of Artemis has Jazz on the run from both the law and nefarious forces — it’s gonna look amazing as a movie!

One scene I can’t wait to see on the big screen doesn’t even spotlight Jazz. It has a local lawman jumping and crashing through a window three stories up to pursue a bad guy. When one of the onlooking tourists is aghast at how the lawman survives, Jazz reminds us of the one-sixth gravity on the moon. It’s a pretty great visual and one I look forward to seeing realized on film. Because the gravity on Mars, unlike the moon, is more similar to Earth’s, the movie The Martian couldn’t explore these kinds of cool visuals the way a movie for Artemis can.

While Artemis could easily take place in the same universe as The Martian, it is not a sequel. However, much like the epic on Mars, everything that happens on the moon exists within the realm of possibility. I’m no scientist, but what Andy Weir writes seems pretty accurate. It’s refreshing to read some science fiction that’s not set thousands of years in the future or has aliens giving humans some revolutionary technology — we as a people have developed the ability to travel to and colonize the moon with what we have right now. It’s very inspirational. I believe that once the movie comes out, it’ll reignite interest in lunar travel the way The Martian sparked the imagination of traveling to Mars, even more than movies about missions to the moon.

Thanks to my friend Kyle, who works for NASA, for letting me know that Andy Weir had written a new novel. He’s also the one who let me know that a studio scooped up the movie rights right away, before the novel was even published.

I’ve done some research on the upcoming movie, but only have a few facts. Simon Kinberg, who also produced The Martian, is producing Artemis, along with Aditya Sood. Phil Lord and Chris Miller (21 Jump Street, The Lego Movie) are directing — if you’ve read Andy Weir’s style of humor in The Martian, this decision makes sense. Initially, the duo directed Solo: A Star Wars Story, before being replaced by Ron Howard, so you know they like sci-fi. Geneva Robertson-Dworet (2018’s Tomb Raider, Captain Marvel) is the screenwriter; considering her previous work, it’s only logical to have her write the treatment for Artemis‘ female protagonist. Because both 20th Century Fox and New Regency had acquired the film rights to the book, I don’t expect the Disney-Fox merger to throw off the planned release in 2020 for the Artemis movie.

You have plenty of time to read the novel or listen to the audio book before the movie comes out. Do what I did and picture how cool the great moments on the moon will look as a movie. 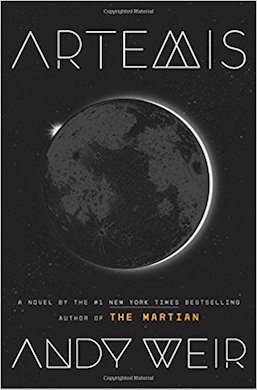